Dera Nnadi, the Ogun I Area Command Comptroller of the Nigeria Customs Service (NCS) on Thursday, urged the state chapter if the National Youths Council of Nigeria (NYCN) to use their positions at partnering the Federal Government of Nigeria in fighting the menace of smuggling in the country.

The Customs Area Comptroller (CAC) for Ogun 1 Command, Dera Nnadi gave the admonition while hosting the State Executive members of NYCN, who paid him a courtesy visit at the Command’s headquarters in Idiroko border.

Nnadi, who was addressing the NYCN executive, specifically pleaded with the youth leaders to leverage on their positions to educate youths of the state not only on the menace of smuggling, but also on other cross bother crimes for which Ogun State has been tagged as a war zone in the FG’s efforts at actualising the objectives of growing the nation’s economy. 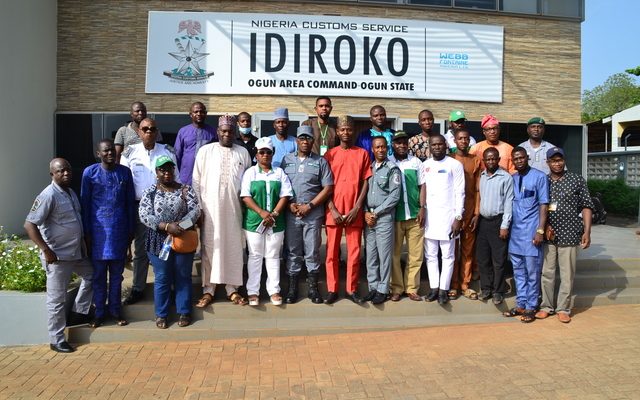 Led by their state chairman, Comrade Abdul -Jabar Ayelaagbe, the NYCN had earlier appealed to the NCS leadership in Ogun 1 Command to prevail on their operatives to desist from the habit of “indiscriminate firing within towns”.

Ayelaagbe in his address explained that indiscriminate shooting of firearms within the towns by NCS anti-smuggling operatives have always resulted in the death of innocent souls, a situation which he said smugglers usually take advantage of to escape.

But responding to their demands, the C.A.C. Ogun Area 1, who appreciated the concerns of the youth, however, expressly stated that Customs and the the Federal Government would appreciate situations whereby the youths of the state partner the Service towards actualising the objectives of eradicating smuggling activities in Ogun.

With specific reference to the claim that smuggling activities was necessitated by the unemployment, Nnadi asked the youths to take advantage of the ongoing recruitment exercise into the Nigeria Customs Service to better their careers in life, stressing that the Service always accorded high priorities to nativity of the border communities each time it is recruiting.

“The South West gave birth to NYCN in 1964 and Ogun State produced the first President of the council. It is our expectations that the Ogun State chapter of NYCN will leverage on this glorious antecedent and join NCS to fight the menace of smuggling and other cross border crimes in the state”.

“We need to reiterate that Ogun State is a trade hub where legitimate trade thrives and indeed, the Customs Command is the facilitator. We wish to obtain the assurances of the great Ogun State Youths to support NCS in this quest of presenting a new face of the Gateway State”

“It is essential we enable and sustain this image in line with historical antecedent of the state as the forbearer of several aspect of our national development”.

I have no doubt that like your predecessors were known for fighting injustice and crimes in the society, you will join us to actualize this objectives.

Disclosing that the youths’ visit coincided with the official launching of the additional 4 Units of special anti – smuggling patrol Toyota Hilux vehicles donated to the command by the Controller General Customs (CGC), Ahmed Ali, Nnadi however, urged the NNYCN executives to assist in passing the message across that the specialized equipment was originally meant to prevent external aggression against the country, but without any hesitation to fight smuggling activities as well.

While expressing the assuring optimisms that NCS will organize a forum to further educate greater number of Ogun youths on the need to support the Service, Comptroller Nnadi however, promised that his command will continually instill it in the psyche of its personnel on the need to adhere to the rules of engagement in the course of dealing with members of the, border communities, stressing that “we urge them to expose smugglers and criminals in their midst”.