There seems to be a conflict in the acceptance of Governor Babajide Sanwo-Olu’s second term bid. Sanwo-Olu who was endorsed by the APC Governors’ Advisory Council (GAC) has been rejected by another group of the Lagos state APC. Meanwhile, the activities of GAC have been labeled as unconstitutional as its existence does not appear in the constitution of the APC. 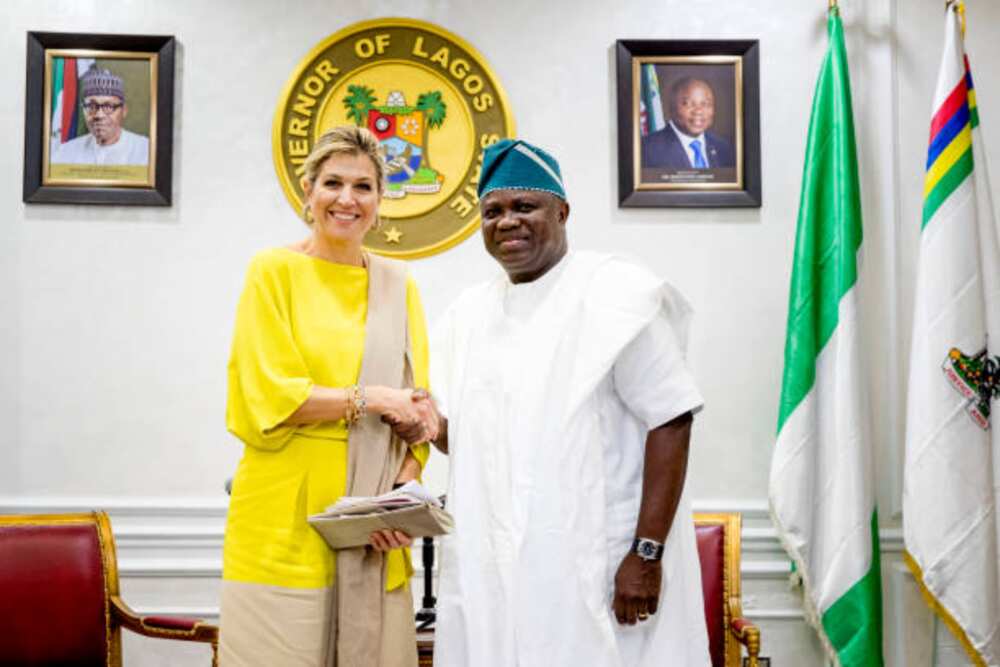 The chairman of the Ambode Campaign Organisation (AMCO), Olawale Oluwo has vowed that the group will facilitate the moves to scrap tax consultancy firm, Alpha Beta. Oluwa made this known in an interview with ThisDay newspaper published on Tuesday, May 3.

Ex-Gov Akinwumi Ambode who has been tipped to unseat the incumbent is pictured with Queen Maxima of The Netherlands during her visit to Lagos on October 31, 2017. Photo Credit: (Patrick van Katwijk) Source: Getty Images

It will be recalled that in December 2018 under the administration of the then Lagos state governor, Akinwunmi Ambode, Oluwo resigned his position as the commissioner for energy and mineral resources in Lagos state.

When asked why he resigned at the time, he stated that it was a show of protest on his part as he did not like the fact that his boss will be denied a second term in office by the APC Governors’ Advisory Council (GAC).

When asked about the role of the Governors’ Advisory Council (GAC) in the selection of the party’s candidate, Oluwa stated that GAC has no constitutional right to nominate a candidate.

He added that the existence of GAC as the apex body assigned to anoint a candidate of the state is alien to the party’s constitution. Oluwo also stated that any candidate who emerged from the selection of GAC is not the party’s candidate.

2023: Why you should not defect to PDP, APC tells Ambode

In another development, the Lagos state APC has warned ex-governor, Akinwunmi Ambode not to defect to the opposition party, PDP. According to that party’s spokesperson in Lagos, Seye Oladejo, he said the PDP had already promised another person its governorship ticket ahead of the 2023 elections.

He added that joining PDP will only amounts to automatic failure at the gubernatorial polls. 2023: Ambode asks youths to get PVC ready

Meanwhile, Legit.ng earlier reported that Ambode urged Nigerian youths to get their Permanent Voters Cards (PVCs) ready ahead of the 2023 general elections. In a Twitter post on Tuesday, February 1, Ambode noted that power is actually in the hands of the youths and that their time is now. The former Lagos governor expressed gratitude to Lagosians who acknowledged what he called modest contributions to the state. He also noted that things can only get better for the state and Nigeria generally.