The Presidency has opened up on rumours that President Muhammadu Buhari  might be backing ex-President Goodluck Jonathan to contest in the 2023 presidential election and succeed him. 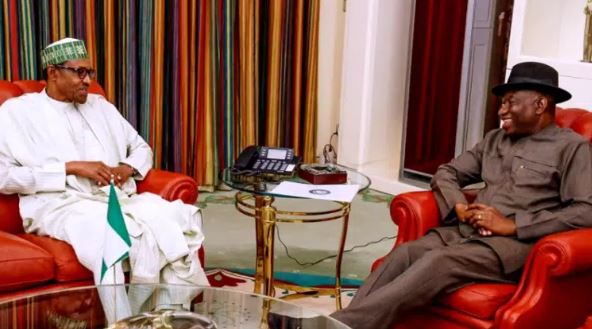 According to Daily Independent, a senior presidential aide said the President was not behind the move to lure Jonathan into the ruling All Progressives Congress (APC) and make him the party’s consensus candidate in the 2023 presidential election.
He stated that President Buhari would never allow Jonathan to succeed him after he heavily criticised him for mismanaging the resources of the country while in office for four years.
The presidential aide, however, said Buhari has great respect for Jonathan for accepting the outcome of the 2015 presidential election and rebuffing pressures from some of his loyalists to reject the election.
He said: “It is pure mischief for anyone to say President Buhari is the one behind the move by some politicians to draft the former president into the party and make him contest the 2023 presidential election.
“Far from it. The Buhari I know will never make a move to allow Jonathan, a man he heavily criticised for mismanaging the affairs of the country while he held sway as president to take over from him.
“Buhari believed that Jonathan’s performance as president was below par and that was why he joined hands with other like minds to oust him from office in 2015.
“Having laid a solid foundation for growth and continuity, he will not allow the progress made so far to be reversed by bringing the same Jonathan back to succeed him in 2023. That can never happen. Doing so will reverse all the gains the administration has recorded since 2015.

“For us in the presidency, one thing is very clear. President Buhari holds his predecessor in very high esteem as a true statesman due to the manner he handled the outcome of the presidential election in 2015.
“Nobody believed that a ruling party with a sitting president which controls the security agencies and even INEC can lose the presidential election.
“When that happened, some enemies of Nigeria who had earlier predicted doomsday that the country will cease to exist in 2015 asked him not to accept the outcome. He rejected their entreaties and called President Buhari to congratulate him.”
“Even though President Buhari was not happy with the way Jonathan managed the affairs of the country, his being gracious in defeat really touched Buhari especially when you compare what Jonathan did with what some African leaders such as Laurent Gbagbo and Yahya Jammeh did in Cote d’Ivoire and the Gambia, respectively.”
The presidential aide said the former leader has refused to criticise the Buhari government in public despite its shortcomings and failures.
He disclosed Jonathan would rather come to Aso Villa to see President Buhari and share his thoughts privately with him, adding that the former President is truly a statesman.
“Also, this government has had its shortcomings and made some mistakes but you will not see Jonathan writing letters or publicly criticising the government just to score cheap political points. Rather, he knows he has free access to Aso Villa to see President Buhari and share his thoughts privately with him.
“These are the two reasons President Buhari greatly admires the former president. But saying President Buhari is working behind the scenes to lure him into the APC and impose him on party members as a presidential candidate is pure mischief,” he added.