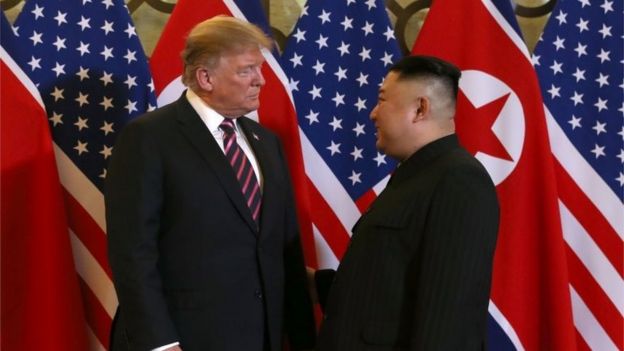 In a tweet issued shortly after his arrival in Japan on Sunday, Mr Trump called the missiles “small weapons”.

President Trump began a state visit to Japan on Sunday by teeing off a round of golf with Prime Minister Shinzo Abe.

The two leaders ate breakfast together on Sunday, before heading out to play 16 holes of golf in Chiba, outside the capital Tokyo.

Mr Trump has said he wants to strike a deal with Japan to address what he has called a trade imbalance between the two countries.

Mr Trump wrote: “North Korea fired off some small weapons, which disturbed some of my people, and others, but not me.” He added: “I have confidence that Chairman Kim will keep his promise to me.”

Not for the first time, his tweet appeared to put him at odds with Mr Bolton, and also with his host nation. Mr Abe last week called the North Korean tests “extremely regrettable”.

The contrast between the president and his national security adviser followed other recent divergences on foreign policy, including how to approach the crisis in Venezuela and US relations with Iran.

That test came after Pyongyang said it had tested what it described as a new “tactical guided weapon” in April.

Neither violate North Korea’s promise not to test long range or nuclear missiles. Yet, they are likely to cause unease in Japan.

“While cooperating closely with the US and other related countries, we are planning to tackle this appropriately by strengthening enforcement of related UN Security Council resolutions,” he said.

North Korea fired a number of missiles over Japan in 2017, leading Mr Trump to tell Mr Abe his country could intercept missiles “if necessary”.

Libya crisis: UN warns battle for Tripoli is ‘start of a bloody war’

Libya crisis: UN warns battle for Tripoli is 'start of a bloody war'