One of the frontline national chairmanship aspirants at the just concluded national convention of the ruling All Progressives Congress (APC) Senator George Akume, said he has donated his N20 million paid for nomination forms to the party. 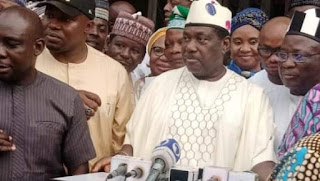 Akume, alongside six other others were asked to step down for Senator Abdullahi Adamu as APC national chairman.
The former Benue governor, who is also a serving Minister of Special Duties and Inter-governmental Affairs also declared that APC in Benue state is now stronger to wrestle power from the Peoples Democratic Party (PDP).
Addressing newsmen when he led Benue delegation on a solidarity visit to the APC national chairman Abdullahi Adamu, at the party national secretariat, Tuesday, Akume assured Nigerians particularly the APC and indeed the national chairman that the crisis rocking the Benue APC was over.
When asked whether he has gotten his money for the nomination forms paid to contest the national chairmanship position as directed, the former governor said: “The issue of directive did not occur whatsoever in our dinner with Mr. President. We ate the dinner with him and he appealed to us to build the consensus as much as we could and that was basically what we did.
“It was not a directive and you know who the president is; a democratic to the core. I know and I recall what happened in the past when I was the governor; there was a war of difference between the way Mr president operates and the way we saw between 1999 and 2007.
“The issue on money does not arise. I had willingly donated my own to the party and I believe others would do the same thing. We have this basic understanding, we have to support the present leadership of the party to succeed; that is what is important so that we will continue with the good work that Mr president is doing.”
On the chances of APC in Benue state, Akume said: “We want to assure Nigerians particularly the APC and indeed the national chairman that the little irritation in Benue state are going to be squarely address for the benefit of our party and for the benefit of our teaming supporters who look onto the APC as the only hope of the common man in Benue state and even at the national level.
“So we are very confident that APC Benue will come on stronger than can never imagine. We are doing very well, we have registered so much, so many members. We have registered those who are ready to vote and therefore, Benue is ready to go.”

Amotekun, Soldiers Clash Over Arrest Of Cows In Ondo