Men of the Nigeria Customs Service attached to the Seme Area Command have seized cocaine valued at N3.9billion. 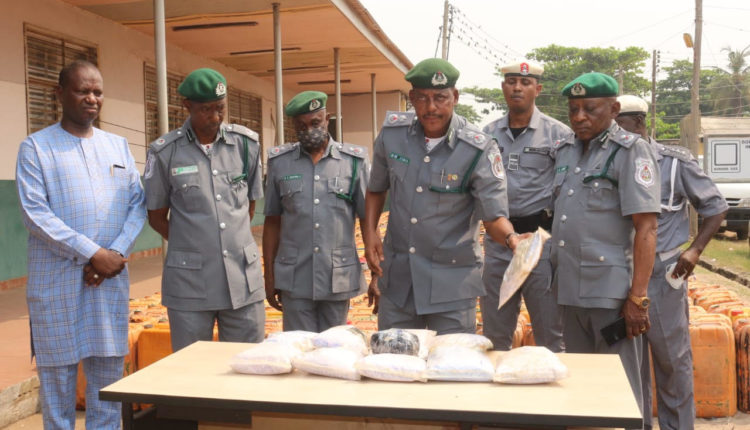 A statement released by the spokesperson for the command, Hussain Abdullahi, says the hard drugs weighing 11.913 kilogrammes were discovered in a bus conveying religious books.

According to the statement, a sizeable amount of petroleum products packaged in sacks were also intercepted by the operatives.

“The Seme Area Command of the Nigeria Customs Service has initiated offensive patrol against the smuggling of petroleum products along the creeks within the Seme and Badagry axis. This renewed effort led to the interception of large quantities of petroleum products packaged in sacks on Wednesday, 26 January 2022.

The aforementioned items were successfully evacuated to the command premises where an examination was conducted. 1,065 jerrycans of petroleum products, equivalent to 31,950 litres were discovered with a Duty Paid Value of N10,041,198.

In the same vein, officers and men of the command while conducting stop and search along Seme-Badagry Expressway intercepted 11 parcels of substance suspected to be cocaine in a Ford Transit bus conveying religious books. Also, one suspect has been arrested in connection with the seizure.

While showcasing the seizure, the Customs Area Controller, Mr Bello Mohammed Jibo, explained that the substance was intercepted at about 9:00 a.m. on Sunday, January 23.

Consequently, the substance was subjected to test and verification by the National Drug Law Enforcement Agency and National Agency for Food and Drug Administration and Control and was found to be cocaine weighing 11.913kg.”

2023: Any Igbo Man Who Supports Tinubu Deserves To Be Banished – Analyst, Obioha