The death toll recorded during the building collapse, which happened Sunday, on Ibadan Street, in the Ebute Metta area of Lagos State, has increased to eight. 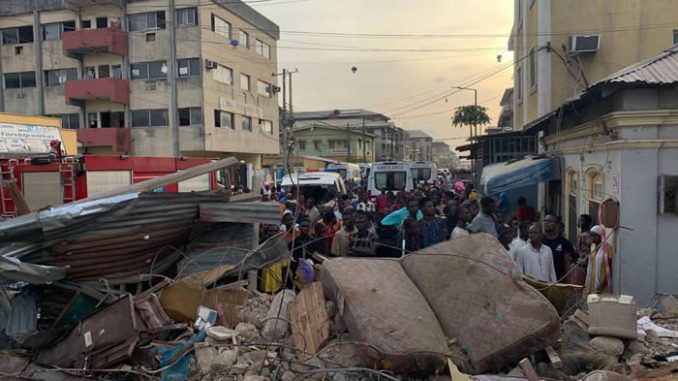 A statement by the National Emergency Management Agency confirmed the development on Monday.

The recovered corpses were deposited in some of the vehicles the emergency responders brought to the scene of the incident.

Thereafter, the corpses were taken to the mortuary.

The PUNCH had reported that the NEMA officials, alongside other emergency response agencies including the Lagos State Fire and Rescue Service; the Lagos State Emergency Management Agency, and the police, commenced a search and rescue operation immediately the three-storey building caved in late Sunday.

No fewer than 23 persons including children were said to have been rescued alive.

The occupants were said to be in their various apartments when the building suddenly collapsed and trapped some of them.

Farinloye, who had confirmed the death of five occupants, said the collapsed structure had been marked for demolition.

He said, “Another three-storey building, on Lagos Street, about 200 metres away from the current scene has shown signs of distress with part throwing pebbles and falling off.

“The building had also been marked as distressed but the occupants were deviant.
However, the building has re-sealed and occupants evacuated by officers of Lagos State Buildings Control Agency.

“Four deaths including two male and two female. 23 people have been rescued alive including seven children and 16 adults. Another young man, Tahin has just been recovered making five deaths.”

The Permanent Secretary, LASEMA, Dr Olufemi Oke-Osanyintolu, in a statement late Sunday, had said some of the injured victims were rushed to the Lagos State University Teaching Hospital for urgent treatment.