DSS Officials Abducted Me, Took Me To Unknown Location To Kill Me — Man Shares Sad Story

A security expert has shared his sad story in the hands of the officials of the Department of State Services. 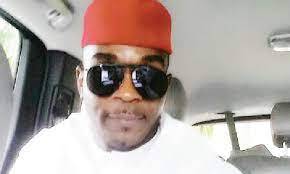 Afolabi Solanke narrated how one Paul Adesina led DSS operatives who broke into his house at 4am and abducted him.
According to him, Adesina with whom he had a pending tenancy case at the Court of Appeal, had kidnapped him with the intention of killing him.
He, however, explained that he escaped being assassinated with the intervention of a retired military officer who was the owner of the piece of land where he could have been executed.
According to him, the DSS officials, after detaining him had gone back to his house to ransack the house and took away valuables which they sold.
He said, “They came and broke the burglary, windows, security door and everything. Initially, I assumed they were armed robbers so I called the police and they asked me to hide somewhere but before the policemen could get to the house the DSS men broke in, they hit their gun on my head, dragged me outside, slapped me, used pepper spray on me.
“My son was at home with me, the boy is home because of the ASUU strike. One of them sat on my son’s neck and the boy was shouting ’I can’t breathe’.
“They later put us into their white bus and drove off. After much movement, I found myself at the FCT Command in Asokoro, they brought me out of the van, and slapped me — Muktal Garba and Paul Adesina beat me so much. They said I did cyberbully that I sent documents to SaharaReporters. I explained why I did that, the man slapped me again.
“Blood was coming out from my ears so I passed out, by the time I regained consciousness, I couldn’t find my son, I also discovered they had gone to my house to take valuables from the house including the dollars I kept in my wardrobe. They already sold some of my property, my clothes, they did this while my son was there handcuffed, all his friends were there looking at him.
“They took over my house, threatened that if I go there, they will kill me. Where I was detained I saw that there were other innocent people locked up in the cell without trial, one of them already lost one of his eyes from too much torture.
“Later, they took me out of that cell to one office belonging to Muktal Garba who told me he could have prosecuted me if not for his colleagues who called him. When they brought me out, they handcuffed me and used a cloth to blindfold me.
“It was then I knew that my Jaguar and 407 had been moved from the house to their place there, they put me in a Hilux, in the midst of two people who are fully-armed. They drove me for 1 hour, 45 minutes, as if we were travelling out of Abuja.
“I started perceiving dust as if we were driving on an untiled road, after a while, they parked, they removed the handcuff and asked me to get down, the other one cocked his gun and I heard a strange voice saying ‘you cannot kill anyone here’, then they said ‘barawo ni’, the man replied them, ‘I am an old soldier, I will call police for you’.
“They started arguing in Hausa, so when I discovered they were arguing, I removed the blindfold and spoke to the man and explained myself. By the time I turned, I saw they already parked my car behind the Hilux, I explained myself to the man, the DSS officials quickly entered their Hilux and drove away.
“By the time I entered my car, I observed that my two phones that Garba took from me are in the car, they wanted to kill me and put my corpse in the car so it would seem kidnappers or armed robbers killed me there.
“I asked the man where I was, the man led me out of that place. It was later I discovered that they took me to Apo Resettlement. By the time I got to my house, I saw a signpost ‘For sale’ by one Uzor with his phone number, I saw that the house was empty, I tried to make phone calls, I couldn’t access my phones, Muktal Garba changed my password.
”I still got a phone call from Paul Adesina threatening to kill me, I am no longer safe, I can’t live in my house, even my other phones are with them.”
Solanke who is also the Chief Executive Officer of Goldeye Security Ltd. says if any form of evil befalls him, the DSS official, Paul Adesina should be held responsible.

Defend Your Communities Like We Do In South-East – IPOB Tells Middle Belt, Kaduna, Plateau Communities