Some security vehicles and personnel have been stationed at Lekki-Ikoyi Link Bridge to prevent any protest by residents of the area against tolling at the bridge.

SaharaReporters observed the vehicles and armed security personnel, including the police at the bridge on Friday as tolling resumed.

Lekki Estate Residents and Stakeholders Association had kicked against a move by the Lekki Concession Company Limited to resume tolling at the link bridge.

Tolling had stopped at the bridge and at Lekki Tollgate, the epicentre of the October 2020 #EndSARS protest, following the demonstrations by youths against police brutality, among others.

Popular online comedian and #EndSARS activist, Debo Adebayo (Mr Marcaroni) had noted that during a stakeholders’ meeting on Wednesday, the residents rejected the commencement of tolling, citing the hardship in the country.

He had tweeted, “We are live at the LCC and StakeHolders Meeting. The Lekki Estate Residents and Stakeholders Association Chairman has announced the decision of all Residents which is NO TO TOLLING!!!!!

“All of us present here have spoken! And not one resident is in support of tolling. The timing is wrong, The people are going through a lot of hardship at the moment! We hope the Lagos state government will do the right thing here and suspend the resumption of Tolling. Nooooo!”

The LCC, some weeks ago announced the recommencement of tolling operations at the toll gate. Omomuwasan at the time said tolling would commence on April 1, 2022, on the Lekki-Ikoyi Link Bridge, however, commuters plying the corridor would not be made to pay toll until April 15, 2022. 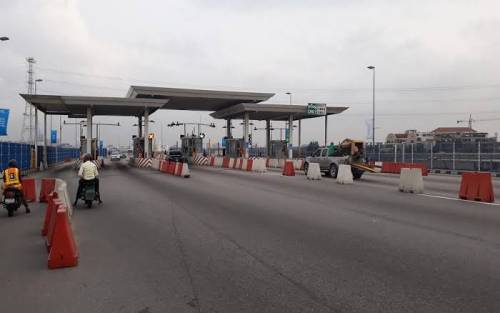 Omomuwasan had said the resumption of services at the Lekki-Ikoyi Link Bridge Toll Plaza followed extensive consultations with, and the support of key stakeholders including the residents’ associations, traditional rulers and community leaders, professional bodies, as well as the Lagos State Government.

But members of the Lekki Estates Residents and Stakeholders Association have denied this.

They have vehemently rejected tolling at the bridge.

The association made its position known in a letter to Lagos State governor, Mr Babajide Sanwo-Olu, dated March 27, 2022, and signed by LERSA chairman, Yomi Idowu.

The residents stated that the resumption of tolling would aggravate the sufferings of Lekki residents.

The letter reads in part, “Let’s first paint a picture of the current reality being faced in the socio-economic environment: According to the Central Bank of Nigeria/National Bureau of Statistics, unemployment is at 33% while youth unemployment is at a staggering 42.5%; and when you add youth under-employment, you have 63.5% of youth either unemployed or underemployed.

“Also, Consumer Price Inflation (CPI) is currently at 15.70% resulting in increasing cost of food compounded by the increased cost of electricity, fuel and diesel prices. In addition to all of this, the Academic Staff Union of Universities (ASUU) is on strike, meaning students are at home, with other unions threatening to go on strike.

“It is therefore evident that with elections around the corner combined with Nigeria’s precarious socio-economic climate, any additional triggers increasing the burden of citizens could produce unexpected outcomes. We view with deep concern and trepidation the less than transparent attempt at recommencing tolling activities at the Lekki-Ikoyi Link Bridge, even as matters relating to the #EndSARS protest, which led to the termination of tolling activities in the first place, remain largely unresolved. The issue is compounded by the myriad of issues bedevilling the rationale to toll at this location.”