Former Lagos State governor, Bola Tinubu, who is also National Leader of the All Progressives Congress, has returned to the country after his trip to Saudi Arabia. 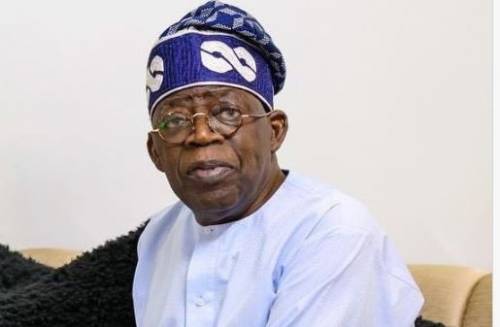 Tinubu on Saturday was seen posing with the N100milion nomination and expression of interest forms of the ruling party bought for him to pursue the 2023 presidential contest, which he described as his “lifelong ambition”.

On Saturday, he showed his nomination form, which had been picked up by his supporters for him on Friday.
Emeka Nawjuiba, Minister of State for Education; Governor David Umahi of Ebonyi State; Governor Yahaya Bello of Kogi State are among aspirants, who picked the forms ahead of Tinubu.
Although the ruling party has not zoned its presidency, most of those in the race are from the South.
The decision of the ruling party to swap its national offices between the North and South led to the emergence of Senator Abdullahi Adamu from the North-Central as national chairman.
Before the convention, Governor Nasir el-Rufai of Kaduna State had said though the APC had not decided on zoning the presidential ticket, the swapping of national offices was an indication of where its presidential candidate would come from.

The Independent National Electoral Commission has fixed June 3 as deadline for political parties to submit the names of their candidates.
The five South-West aspirants are expected to battle other presidential aspirants from other zones for the party’s ticket at the primary slated May 30/June 1.