Two fake military officers, nabbed by police detectives in Ondo state, have narrated where and why they bought and sold military uniforms. 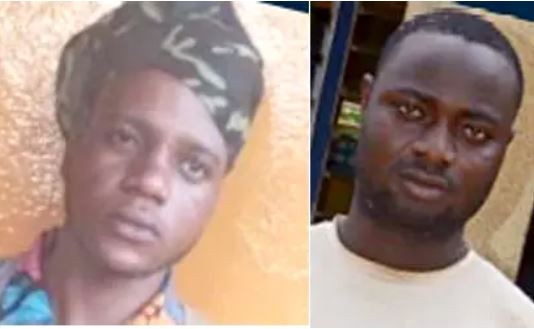 Vanguard gathered that the suspects have confessed during interrogations that they resorted to buying military uniforms to enable them pose as soldiers and help residents to settle scores and collect debt.

They were also accused of selling  military uniforms to others who wanted  to pose as soldiers while committing offences.

The suspects who posed as soldiers were engaged by unsuspecting members of the public to settle scores and collect debt.

This ugly development was exposed when 14 suspected criminals were paraded by the state police command.

Two of the suspects, were alleged to have impersonated military officers in order to make ends meet.

Speaking with Vanguard, the 27 year old student of School of Health Technology Akure, Ondo State, Owolabi Abiodun, explained why he engaged in the purchase of the military uniform.

Owolabi confessed that “l just like the military uniform and I went to buy it from the open market. I am not a soldier”.

Giving the details of how the suspects were arrested while impersonating as soldiers, the state command image maker, Funmi Odunlami said that  “On 11th of April, 2022, at about 2.00pm, information was received by Policemen attached to Oda Division, that a young man who claimed to be a student of School of Health Technology Akure, came alongside his friends, threatened and harassed his co-tenants and the landlord that his landlord would pay with his life if he evicted him from the house.

“Upon the receipt of the information,  policemen were sent to the house to invite him and his friends.

“Investigation however, revealed that the suspect had been parading himself as a soldier in his area. He, however, confessed that he was never a soldier, but liked the uniform and bought it from an open market.

“He is helping the Police with other information that can help in arresting his cohorts and those involved in the illegal buying and selling of military uniform.

“In the same vein, on the 8th day of March 2022, one  Benedict Ifeanyi, ‘m’, aged 23  paraded himself as a soldier  to one Miss Tony Joy, and promised  to assist the lady to arrest one Owolabi Olawumi, who defrauded her of the sum of two million Naira under the pretence of selling five plots of land to her.

“After arresting  Owolabi Olawumi, the suspect took him to an unknown destination and obtained the sum of three hundred thousand naira from him without the knowledge of the complainant but lied to Joy that he had taken the man to Army Barracks where he would be made to pay the money he obtained from her.

“Few weeks later when Joy didn’t hear about her money and the whereabout of the self acclaimed soldier, she went to Army Barracks to report him and it was confirmed that he was never a military man.

During interrogation, he confessed he was never a soldier.

They were arrested after they attacked one Mukaila Bello, aged 54 Along Ikare road, David camp and  also collected  ¦ 203,000.00 cash from one Vincent John Yohanna.

Also, some suspects who lodged in a Hotel along Ilesha Road, Akure, whose mission was to receive a stolen Toyota Hilux were apprehended.

“Intelligence gathering, led to the arrest of the duo of  Abdulrasheed Adeyemi, aged 52 and Oluwasina Akeen aged 61 both from Kwara State.

“During interrogation, they claimed that one Johnson whom they both met at the Correctional Centre lured them into the act”.

Police image maker said that detectives moved to Sokoto State and  arrested the said Alhaji who also confessed to buying and receiving  stolen vehicles and that the vehicle has been sold to  a buyer in Niger Republic.

Seven passengers, according to her were rescued by police detectives when their commercial bus with registration number GME 963 XC, outbound Gombe State to Lagos State ran into a barricade along Akunu-Akoko/Ayere Road and were attacked by Armed men.

“They were attacked by armed men carrying cutlasses and a rifle who  jumped on to the road and seven of the passengers were whisked  into the bush.

“On receipt of the information, the combined teams of Police, Vigilante and local hunters mobilized into the bush and rescued all the victims unhurt.

Odunlami said that all the suspects would soon be charged to court .