Five suspects posing as officers of the Nigeria Security and Civil Defence Corps (NSCDC) to allegedly extort money from unsuspecting petrol dealers have been arrested. 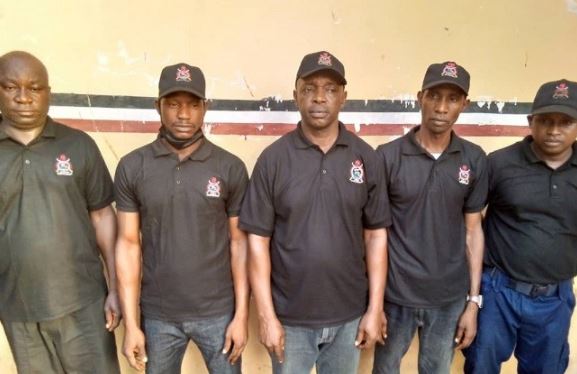 The public relations officer of the NSCDC in the state, Babawale Afolabi, in a statement on Wednesday March 9, said that the suspects were going about petrol stations in the Ilorin metropolis, claiming to be Civil Defence officers on national assignment from Abuja.

Afolabi said that investigations had commenced to confirm whether the suspects are running a syndicate with other members in the 16 local government areas of the state.

“On the 8th of March, 2022 at about 1422 hours, our anti-vandal unit led by ACC Yusuf got an intelligence report that some groups of men, who put on uniforms of Civil Defence have been going around filling stations in Ilorin metropolis claiming to be members of national task force on assignment from Abuja. After meeting the managers of the petrol stations, they will collect money from them, because the petrol sellers believe that they were officers of the NSCDC,” he stated.

The spokesperson said that the suspects identified as Saheed Adedayo, 37, Muritala Oloruntoyin, 40, Emmanuel Ferife, 45, Abiodun Oluseun, 44 and Isaac Aluko, 43, all claimed to be members of the Importers Association of Nigeria, and have been going around extorting money from unsuspected petrol sellers.

Luck, however, ran out of them as they got to a filling station at Amilegbe area of Ilorin when the office of the anti-vandal unit was contacted by the management of the petrol station. The unit patrol team later swung into action and the five suspects were arrested.

“During interrogation, the suspects admitted to be doing illegal duties, though maintained to be members of the Importers Association of Nigeria and were going about filling stations to gather intelligence reports.” he added.

Meanwhile, the commandant of the NSCDC in the state, Makinde Ayinla, has appealed to the petrol stations and members of the public to be wary of unscrupulous elements who would like to use the present fuel scarcity situation to perpetrate their criminal activities.

He advised people to carry out all necessary due diligence before dealing with any group or individuals claiming to be security operatives.

Tragedy! Man Slumps, Dies Inside Bank In Delta After Queuing For Hours