Four Burnt To Death As Commercial Bus Somersaults, Goes Up In Flames

Four victims were burnt to death after a commercial vehicle went up in flames at the Fidiwo axis of the Lagos-Ibadan highway, Ogun State on Wednesday. 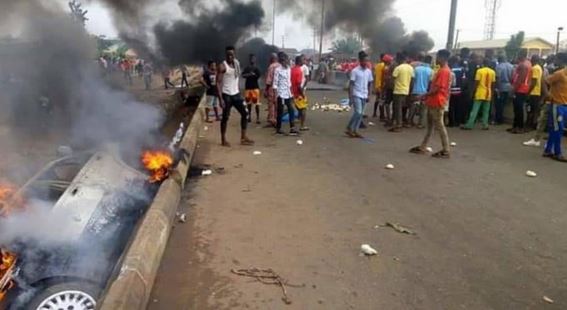 Dailypost reports that the bus had a tyre burst, lost control, somersaulted and eventually went up in flames.

Confirming the incident, the Federal Road Safety Corps (FRSC) said the crash occurred at about 2:25pm around Ogunmakin.

It was gathered that the accident involved 18 men, 13 of whom were reportedly injured.

Okpe said the registration number of the Toyota Hiace bus was also burnt and could not be read.

“The suspected causes of the crash were speed, tyre burst and loss of control. The vehicle somersaulted and went into flame.

“The injured victims were taken to Victory Hospital, Ogere and some to Ider Hospital, Sagamu,” she added.

Meanwhile, the FRSC has commiserated with the family of the victims, advising motorists to always check their tyres and avoid speed violations.