A bullion van belonging to a yet-to-be-disclosed bank was on Thursday afternoon attacked along the Otor-Owhe section of the Ughelli/Asaba Dual carriageway in Isoko North council area, Delta State.

They were unconfirmed reports the hoodlums carted away an undisclosed amount of money. 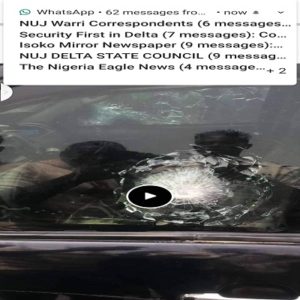 It was gathered that they shot sporadically into the air and sprayed bullets on the van during a shootout with operatives.

Residents were said to have scampered for safety following the heavy shootings.

He however clarified that the money carted away were “condemned currencies which were being conveyed to the Central Bank of Nigeria (CBN)”.

He added that the hoodlums escaped with gunshot injuries in the ensuing gun duel with policemen.