Michael Agbaeje, a Nigerian man, who allegedly assaulted and brutalised his wife, Roseline Victory O’Neill has been rearrested by the police, according to SaharaReporters.

A source told SaharaReporters that Michael was arrested during the weekend after he failed to honour police invitation.

Also picked up by the policemen from force headquarters in Abuja was his brother, Paul Tony Agbaeje, who was accused of threatening to kill Roseline because of her pursuit for justice.

Roseline recently took to social media to narrate how Michael inflicted knife cuts on her over alleged infidelity.

According to her, she had in the past, caught her husband cheating many times on their matrimonial bed but she forgave him.

She said they got married on November 24, 2018, after both checking their HIV status and submitting negative reports.

However, Roseline claimed that into the marriage, she discovered he had tested HIV positive since 2017 yet concealed the information from her.

She said she confronted him about it and he told her he owed her no explanation.

Subsequently, she forgave her husband and remained in the marriage.

Roseline, who has a food stand in Cultural Centre Field, Calabar, said her life changed on December 27, 2020.

She woke early that Sunday and went about her business to fend for herself, as she claims her husband spends his money on women, so she is left to cater for her needs on her own.

Since it was the festive season and most of her workers travelled for the Christmas break, she had a lot of work on her hands.

While selling food to people who returned for the Christmas holiday, she said a customer came in and she recognised him as an old friend from school. They hugged, chatted briefly, then she went about serving her other customers.

Because it was a busy day for business, she sold food till 11 pm. She explained that she was too tired and sleepy by the time she was done so she called the driver who usually takes her back home but he did not answer the phone.

She said her old classmate, who was still on the field with other revellers, tried to help her order a cab online but she said the cost was too expensive, so she just arranged chairs and decided to sleep at her stand that night.

She explained that this was not unusual during festive seasons, adding that others also slept on the field that night.

So she slept off immediately and woke the next morning to shouts from her husband calling her a “prostitute” and other names. 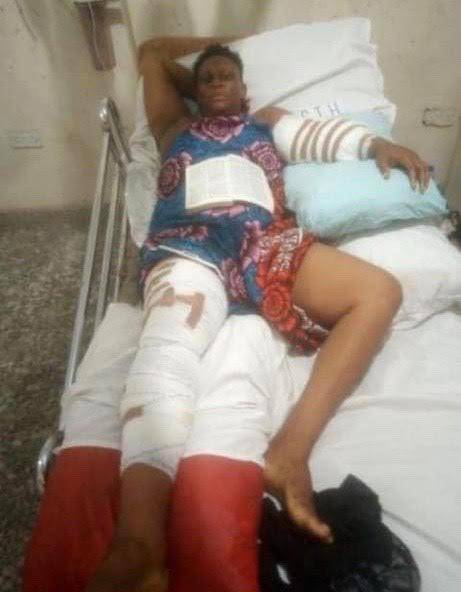 “When everything ended around 11 pm, I was not just tired but weak as I hadn’t eaten in days (no time to even do that). I stared at the bottles, plates, cups, pots… how do I start arranging, and if you leave them outside, your cups and bottles are gone the next day as fellow vendors will do you a favour by taking them all,” Roseline said.

“I wanted to take the risk because I needed to be home to bathe, rest and get a good sleep on my bed. I called the driver who usually takes me home to come to pick me up but could not get him. It had gotten very late already and all I needed was to sleep and I didn’t mind sleeping at my stand as it wasn’t unusual during festive periods like Christmas.

“This friend of mine was still around too enjoying the cruise of Calabar he had left for years. He had tried calling Bolt but the charges were high and the probability of even taking me home was uncertain so I decided to spend the night there. The friend also decided to join. It wasn’t unusual, there were many people around, security personnel and all.

“The place was just busy and rowdy as Calabar cultural centre would be during Christmas period. I made spaghetti for both of us to eat, we discussed (strictly business) and then I slept off on the chairs I had arranged. I never knew oga (husband) had gone home and returned to the stand, made all the preparations because I didn’t return home and he came in the company of his colleague at work.

“As I said, I had slept off and never knew about my friend. The next thing I heard was Michael’s voice beating the table that was in front of us. I opened my eyes and there the drama started. He was calling me names, prostitute ohh, cheat, oh plenty ‘I no fit count’. That I was cheating on him blah, blah, blah, this time accompanied by an anti-cultism man that was on night duty.

“I couldn’t understand how sitting on a chair turned to cheating. My friend even tried to explain to him that it was not actually what he thought, after all, he never met us in a compromising position or even close to each other… we were far apart from each other. Hubby didn’t care to listen to what any of us had to say. ‘Me wey sleep still dey my eye oh and was overtired and with severe headache’ (Meanwhile, I was still feeling drowsy and was very tired).

“I asked what he was doing? How could he accuse me when he didn’t catch me in the act? ‘If I had wanted to do anything, oga, hotels don finish where I go do for cultural centre, field? Haba na, ogaaaaaaa’. He told me ‘If you don’t kill me this night, then I’m sure of killing you”. I tried standing but my legs were weak and I had to sit back. I then asked him what statement was that because I don’t like such talks.

“Abeg sleep still d my eye sef oh …. as I got up to give him some space, I saw him remove something from behind him. Heaven knows I thought it was a belt and he brought it straight to my left chest. Thinking he wanted to beat me with it, as usual, I used my left hand to block what was coming, that was when I felt deep pain and then I knew I was done for. He repeated the stabs like 3 times, still aiming for the left side of my chest.

“I fell to the ground, I couldn’t shout, couldn’t talk, couldn’t scream, and couldn’t move because I was weak and in pains now too. And the place was dead dark that no one knew what was going on. That was when my friend shouted and when hubby saw he couldn’t get my chest, he now aimed at my right leg and lap and stabbed me more than 10 times.

“’Ogaaaaaa, you no get conscience say na person pikin where labour pain the mama to born you dey slaughter so like chicken so oh goshhhhh’. I passed out, I collapsed like a building without a foundation. I was helpless like someone without hope, I fainted like a bastard, I died like an orphan (which I am). I laid down lifeless, breathless and hopeless. I never knew what went wrong.

“All I heard myself say was calling out my child’s name; my little son’s name, Othniel was all in my head and my siblings’. Then I went off. I tried with all the strength God gave to me to stay alive, begging God for help for the sake of my children. And the good news is He heard the prayers. I woke up hearing voices saying she is back, she is alive, let’s rush her to the hospital.

“According to witnesses, I was first rushed to Otop Abasi Police Hospital here in Calabar and then to the teaching hospital (University of Calabar Teaching Hospital). Hours later, I was taken into the theatre where I had three surgeries on the hands, and one on the right leg. After weeks, the left hand died of infection from the knife used and was amputated on January 20, 2021. He was arrested and granted bail after three days and was later rearrested. Right now, the case is in court, but he was given bail again.

“And in the hospital, we needed money for surgery. I still called him oh, he said he was coming with the money. The money needed was over N300,000 and uncle (my husband) came with N20,000, funny right? Yes, it is funny. I screamed I talked, oga abused me, oh, calling me the names he was used to calling me and even wanted to beat me if not for my brother and cousin.

“I have caught him countless times with women, even in our bed while courting. Is it condoms I want to talk about which would be scattered around my house? Even when in the hospital, after my discharge, I needed to pick up something urgently from his house. I saw condoms and manpower drugs in his bags. I smiled but this is someone that sees me as a cheat oh. Anytime I ask for money he would say he doesn’t have it but I would see alerts sent to women in thousands of naira and hundreds of thousands, but ‘madam no fit see N1, 000 collect… tell me why I shouldn’t hustle for my money?’

“Now he has kept me handless, how do I cook and hustle to take care of myself as I used to because I am not the kind of person who begs for money.

“How do I deal with this now? Cost of prosthetics is in millions of naira.’ Where poor pikin like me go take this kind of money from after millions have already been spent na? See me see wahala oh. We got married on November 24, 2018. We did our HIV test and we summited negative.

“But I discovered this young man has been HIV positive and been on drugs since 2017 and when Roseline asked, he said he owed me no explanations, let alone apologies. ‘Na so I carry myself run go hospitals for test oh and then did same for me son, including Navy hospital… Yet I never left and I never cheated. I suffered a big deal but since I look troublesome… People say, yes she is the cause. Even some maternal family members see me that way… they think he is the angel and I’m the demon.”