How Nigerian Embassy In Ireland Extorts Over N47,000 From Each Passport Applicant For Staff Members To Share

The Nigerian Embassy in Dublin, Ireland is collecting illegal €100 (approximately N47,000) postal orders from Nigerians applying for passports which are shared and monetised by staff members for personal gains, SaharaReporters has learnt.

Sources told SaharaReporters on Sunday that workers at the Embassy resumed the fraudulent practice after the departure of the former Nigerian Ambassador to Ireland, Dr (Mrs) Uzoma Emenike.

According to one of the sources, Nigerian Embassy workers in Ireland have mandated applicants to submit with their application a €100 postal order not addressed to anyone in particular.

SaharaReporters learnt that the embassy used to request postal orders from passport applicants but that was stopped by former Ambassador to the European country, Dr Uzoma Emenike, who is now the Ambassador to the United States of America.

According to one of the sources, the Embassy recently issued a statement backdated to September 2021 to give the illegal practice an official seal.

“Since Dr Uzoma Emenike has been posted out from Ireland to the US now, the staff members are the ones requesting for postal orders from Nigerians who are applying for passports.

“They are not giving people their passports except they bring blank postal orders which they will go claim. Now, they are charging illegal 100 euros postal orders.

“They gave express warning that it should not be addressed to the Nigerian Embassy but should be left blank,” one of the sources said.

Another source told SaharaReporters that though the practice had been going on for some time, the Embassy recently released a memo in an attempt to give the illegality official backing. 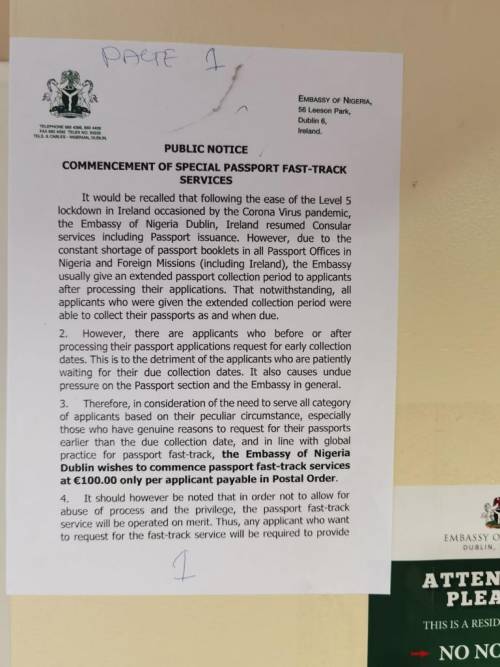 “The practice has been going on for a while now, so now they decided to paste a memo at the embassy and backdated it to September 2021 in order to make it look as if it is now official,” the source said.

“However, in the memo, they cleverly decided not to mention who to address the postal order to. They will reject it if addressed to the Nigerian Embassy. We understand that they share the postal orders among themselves on weekends for them to cash out.”

Indeed, copies of such postal orders obtained by SaharaReporters reveal they are not addressed to the Nigerian Embassy in Ireland or any office in particular.

A copy of the memo titled, ‘Public notice: Commencement of special passport fast-track services,’ and obtained by SaharaReporters said the illegality was introduced for passport applicants who are in urgent need of their passports due to the scarcity of passport booklets in Nigeria and in foreign missions.

The memo dated September 2021, however, added that such applications must come with a €100 postal order.

The memo read, “It would be recalled that following the ease of the Level 5 lockdown in Ireland occasioned by the coronavirus pandemic the Embassy of Nigeria, Dublin, Ireland resumed Consular services including passport issuance. “However, due to the constant shortage of passport booklets in all passport offices in Nigeria and foreign missions including Ireland), the Embassy usually gives an extended passport collection period to applicants after processing their applications. That notwithstanding, all applicants who were given the extended collection period were able to collect their passports as and when due.

“Therefore, in consideration of the need to serve all category of applicants based on their peculiar circumstance, especially those who have genuine reasons to request for their passports earlier than the due collection date, and in line with global practice for passport fast-track, the Embassy of Nigeria Dublin wishes to commence passport fast-track services at €100.00 only per applicant payable in postal order.

“Any applicant for the fast-track service must have processed his/her passport application (i.e. must have his/her biometrics already captured). Thereafter, he/she may come along with the passport coaction slip as well as evidence of urgent need for the passport and a €100.00 postal order.

“The passport fast-track services are only on Thursdays and Fridays from 10.00am to 1.00pm.”