A suspected drug baron has explained what he does with indian hemp seeds caught in his possession. 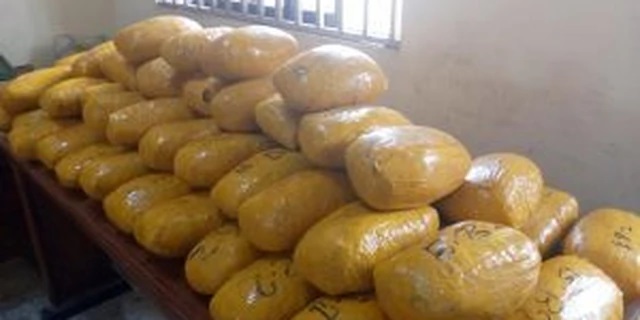 Speaking in Kaduna on Saturday while being paraded, the drug baron said the Indian hemp in his possession were for the consumption of his poultry birds.
“I have a poultry farm and was told that if I feed the chickens with Indian hemp seeds, they would grow fast and strong, and would not fall sick.
“So, I do mix the weed seeds with their food when feeding the chickens.
“I fed the chickens with the Indian hemp seeds only once before I was arrested, he told the News Agency of Nigeria on Sunday in Kaduna.
He said NDLEA operatives seized the Indian hemp seeds from his house and arrested him, admitting, however, that he used to smoke Indian hemp.
The suspect also told NAN that he observed that the seeds made his chickens to look healthier and stronger.
“The situation I have put myself is shameful. I promise not to repeat it in my life,’’ he said.

Commander of the NDLEA in Kaduna State, Mr Umar Adoro, told NAN on Sunday that the suspect was arrested on April 17 with 3kg of Indian hemp.
Adoro said the suspect, arrested at Makarfi Road in Rigasa Area of Igabi Local Government Area of Kaduna State, had been on NDLEA’s wanted list for a long time.
“He is one of the notorious drug dealers in the state. We have been searching for him for long. What helped us is the Ramadan fasting period when drug dealers operate only at night.
“When they are done peddling drugs in the night and are not expecting any patron in the morning, they oversleep and we take that as an advantage to arrest them.
“We have arrested about two of them in such manner,’’ Adoro told NAN.
He noted that feeding the chickens with the drugs as the suspect claimed had its own dangers. The side effects on the chicken would be determined by veterinary experts.
The NDLEA commander advised those drugging animals in the belief that it could enhance their health status to put humanity and the community into consideration.
Adoro assured that all suspects arrested would be arraigned upon the completion if investigation.