I Wanted to Become Wealthy Since 2007 – Ritualist Who Severed Head, Hands of 12-year-old Boy In Kwara Confesses

A suspected money ritualist has confessed after he was arrested by the police in Kwara state. 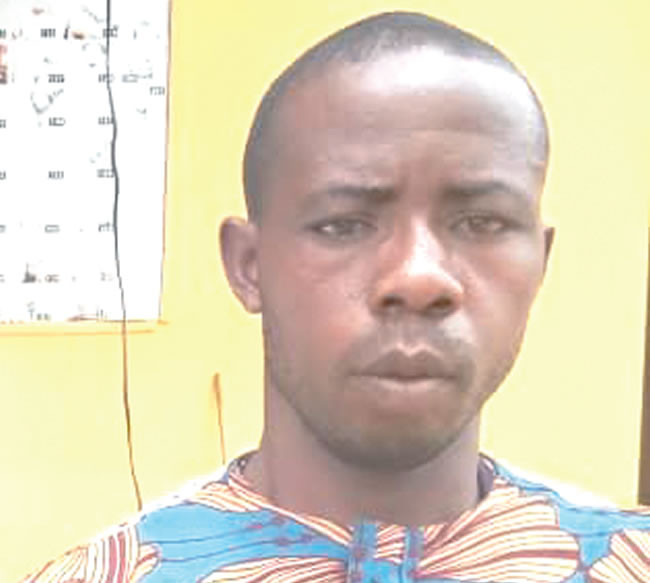 Wasiu Omomose was arrested with human head and hands of a boy in Kwara State and he confessed that he had nursed the thought of money ritual for about 15 years.
Wasiu Omomose, 35, was arrested alongside Akanbi Ibrahim, 32, by policemen attached to Operation Harmony, while they were on patrol on OkeOyi/Jebba road at about 11:30am on Sunday.
However, during interrogation, Omomose confessed that the second suspect, Ibrahim was innocent, as he just picked him on his way to Ilorin.
In an interview with the Nigerian Tribune, Omomose further confessed that he severed the body parts of the deceased 12-year-old boy for money ritual purpose, saying that he believed that knowing about the death and burial of the boy was divine.
The suspect, who claimed to be an okada rider from Share Town in the state and married with five children,  also said that he was taking the fresh human head and hands to an Alfa in Ilorin for ritual purposes.
“The boy whose head and hands I severed was brought to Share Town for care from Lagos State when he became so ill. I learnt this from his cousin (name withheld) when I picked him as a passenger and we got talking. I’m also related to the paternal grandmother of the passenger,” he said.
“On Saturday, as I was riding with the passenger, he informed me of the death of his cousin who was about 12 years old. After the discussion, I dropped him off, but the boy’s death struck my heart as an opportunity to get body parts for money ritual.
“The deceased was taken to the cemetery and buried. Then I thought again that if I could get the body parts, the poverty I was experiencing would end. At 9pm, same day, I went back to his graveside, dug it and cut off his head and hands with the knife I brought. I was there alone.
“I had a native doctor (name withheld) who was also a hunter. He was living at Oju Ekun area, close to Adangba area. We had been together for a long time and were members of Oodua People’s Congress (OPC).
“Since 2007, I have been looking for means of having wealth. I discussed with the native doctor but never made the move to look for things needed to perform the ritual. This was the first time I did  such.”
Speaking further into what pushed him into the act, the suspect said: “I bought a motorcycle from the father of the deceased’s cousin, one Alhaji (name withheld), for N350,000. I just finished paying but the motorcycle was giving me a lot of worries over constant repairs. I decided to sell it but it was so bad that instead of its being bought for at least N180,000 to enable me purchase that of N550,000, it was being priced for N120,000.

“When I learnt of the young boy’s death, I thought of what the native doctor told me many years back and decided to seize the opportunity to act on it.
“After leaving the cemetery, I kept the bag containing the human parts in the bush in front of where I live with the thought that at daybreak, I would take them to the native doctor. Before then, the last time we spoke was about a month ago.
“At dawn, one of the boys with the native doctor called and told me that he was dead. Immediately, my phone dropped from my hand. I believe that the spirit of the deceased exposed my act.”
He maintained that the man arrested with him was innocent, as he was just a passenger who wanted to follow him to Ilorin to purchase paper rolls.
“The man asked where I was going and I told him it was Ilorin. He asked me to help get paper rolls from the post office when coming back, but I told him that it would take a long time before my return. That was how he decided to follow to do the purchase himself,” Omomose stated.
Commenting on the development, the state Commissioner of Police, Tuesday Assayomo said that the suspect would be prosecuted as soon as investigation into the case had been concluded.