A woman illegally arrested and detained for one year by officers of the Intelligence Response Team of the Nigeria Police Force led by the suspended DCP Abba Kyari has finally regained her freedom. 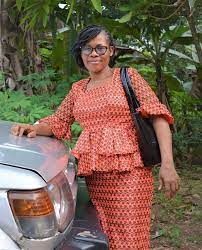 Maria Ezediaro regained her freedom on Thursday, April 21, 2022.
She was said to have been detained at a cell at the IRT’s dreaded abattoir facility.
Speaking on her case in a statement issued yesterday, the Head of the legal team to Nnamdi Kanu, Ifeanyi Ejiofor said following the application for the enforcement of her fundamental human rights filed on her behalf before a Federal High Court in Abuja, “she was hurriedly charged to court on frivolous and smokescreen charge by the infamous IRT.”
Ejiofor said, “This step was clearly targeted at truncating the Fundamental Human Rights suit we filed to compel her release.

“Nevertheless, the long arm of the law has finally caught up with those monsters in uniform as the Federal High Court proceeded to hear our suit on the merit and consequently, directed for her unconditional release.”
According to Ejiofor, damages have been awarded against the suspended DCP Abba Kyari together with members of his disbanded outfit, for the gross violation of Mrs Ezediaro’s fundamental rights.
He equally noted that the Federal High Court ceased the frivolous charge brought against the grandma and also granted her bail on the group’s application.
He added: “Today, Mrs. Ezedalor has finally regained her freedom and presently walks the street a free person.
“Be assured Umuchineke, that we are vigorously pursuing the bail applications of every other person(s) arrested and detained in similar circumstances and they shall all regain their freedom in due course.
“My team and I shall stop at nothing to ensure that all Umuchineke arrested and still detained at various detention facilities of the Nigerian Security agencies are released. Chukwuokike Abiama is always on the throne.”