Just In: We’ll Challenge Sanwo-Olu At The Primary—Ambode Campaign Organisation

Despite the endorsement of the Governors Advisory Council, the  Ambode Campaign Organisation (AMCO), the political structure of former Lagos State Governor, Mr. Akinwunmi Ambode, has declared that it would challenge Governor Babajide Sanwo-Olu in the governorship primaries. 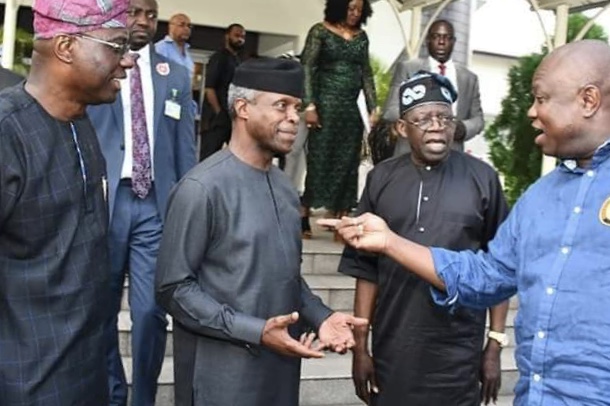 The group also came out strongly on Saturday against the presidential ambition of the All Progressive Congress (APC) National Leader, Asiwaju Bola Ahmed Tinubu, saying the party should reflect the wishes of the people.

Speaking through its coordinator and former Commissioner for Energy and Mineral Resources in the state, Mr. Olawale Oluwo, who was a guest in a City FM programme monitored in Lagos, the group said it’s interested in the next election and will fully participate in all the elections. He added that the group is ready to challenge the dominant political force in the state and restore power back to the people.

The APC in Lagos State must be guided by its constitution and guidelines. As far as we know the Governor’s Advisory Council (GAC) is like an NGO and it’s not known to the constitution. The GAC can make recommendations but cannot control the party. It can sponsor candidates the same way AMCO can sponsor candidates. Governor Sanwo-Olu has picked his form and the AMCO candidate will also pick his form.

“AMCO will participate in all the elections. Ambode will not contest the governorship election; we would pick our candidate for the governorship primary. We will pick our candidate and we will go to the field. It’s not sustainable for a set of people to continue to decide who gets what in this state. We want to work with like minds. That change that was frustrated in 2019 made me leave the party, but things have changed with the new leadership in the party at the national level.

Oluwo said that with the emergence of the new National Chairman the group is confident that there will be fairness and justice, adding that AMCO members are ready to operate in a free and fair environment.

Asked if his boss (Ambode) will support the presidential ambition of Tinubu, Oluwo came out with emphatic no, saying that the former Lagos governor was not the group’s favourite candidate. He however said it was within the right of the Vice President and the National Leader to vie for the presidency.

It’s within the right of Osinbajo and Tinubu to join the presidential race, but AMCO believes that the state is not owned by any of the candidates. It’s owned by the people. Bola Tinubu is not our favourite candidate.

“On the suitability of Governor Sanwo-Olu for second term, we sent our people to the field in the last four months to feel the pulse of Lagosians. The data we got from the field seems to suggest that he has not done well. You cannot compare our administration with that of Sanwo-Olu. Yes, he completed some projects of Ambode and he neglected some.

“AMCO is approaching politics from a completely different perspective. We have structures across the 20 local government Areas in the state. Our approach is not that of a godfather; our philosophy and approach is very clear. We want people to play an active part in the politics of the state. Our members have been collecting election forms but they are not making noise about it. But people will begin to know them by next week”.

Oluwo further said that it was not in the plans of the group to join the opposition, Peoples Democratic Party (PDP) to fight the ruling APC in the state, saying that they did not want to challenge the status quo from outside. “We want to challenge them from inside. If they want to cooperate we will cooperate with them, but if they refuse then let us go to the field. We are ready for a coalition, a broad coalition to defeat the status quo. If the people want change, AMCO is ready to lead that change”.

Oluwo also spoke about the silence of his boss since he was denied a second term by the same powers that be. He said Ambode’s silence was strategic, adding that he was silently building his structure to make it formidable in the state. He said the ministerial appointment that he was denied did not in any way make him to be elusive and that his staying away from public glare was a deliberate strategy.

Ambode has not been silent. He has been strategically and tactically building his structure. Ministerial appointment is not a condition to do so. Yes, Ambode benefited from godfatherism, but the people of Lagos state say enough is enough. Why must we continue with it”, said Oluwo.