THERE are strong indications that the Federal Government may concede to the demands of the terrorists who attacked the Abuja-Kaduna train and abducted no fewer than 68 passengers at Katari, Kaduna state, on March 28. 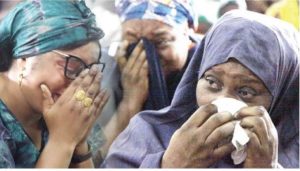 The gang had demanded the release of some of its detained commanders and financiers in exchange for the abductees.

About eight people were killed and 26 others injured when the gunmen bombed the rail track and fired gunshots at the train which was heading for Kaduna.

The gunmen had released one of the hostages, the Managing Director of the Bank of Agriculture, Alwan Hassan, following the alleged payment of a huge sum.

The PUNCH learnt on Sunday that negotiations with the armed gang are progressing but the government, it was gathered, had the option to yield to the gunmen’s demands or launch an all-out attack which is considered high risk.

The terrorists had last Wednesday released the picture of a baby girl that was delivered by one of the two pregnant women in their custody.

The picture was believed to have been released ostensibly to show the world that the infant is hale and hearty and to strengthen their bargaining power during negotiations.

The baby, who was clad in a thick pink dress and a light lemon sweater cap, appeared to be sleeping.

The bandits were reported to have invited a doctor to take delivery of the baby in their den. However, the picture of the mother was not released and no one knows her condition or state of health.

Before this, a video showing the victims being guarded by masked gunmen in a forest was also released.

In the two minutes, 14 seconds video clip, the victims took turns to introduce themselves and urged the government to reach out to the bandits.

“In my own case, I’m a staff of INEC Kaduna State and I’m appealing to the government to please come to our assistance,” one of the victims said.

Security sources said the terrorists were insisting on the release of their members as well as huge cash in exchange for the kidnap victims who include children, women, and some men, some of whom were injured during the train attack.

“The negotiation with the terrorists is going on but the government is seriously considering how to safely navigate the situation without compromising the safety of the abductees or national security.

“The gunmen are insisting on the release of their commanders and financiers; they also want cash. Deliberation is going on at the highest level to resolve the impasse in a way that would not compromise national security or the safety of the abductees,” a source explained.

Our correspondent could not confirm whether a deal has been reached with the gang members but it was learnt that they may release selected victims as a show of good faith after sealing a deal with government representatives.