Some tricycle riders on Tuesday staged a protest against the alleged incessant harassment and attacks by armed thugs loyal to the chairman of Lagos State Park and Garages Committee, Musiliu Akinsanya, aka MC Oluomo, in the Command and Merian areas of the state. 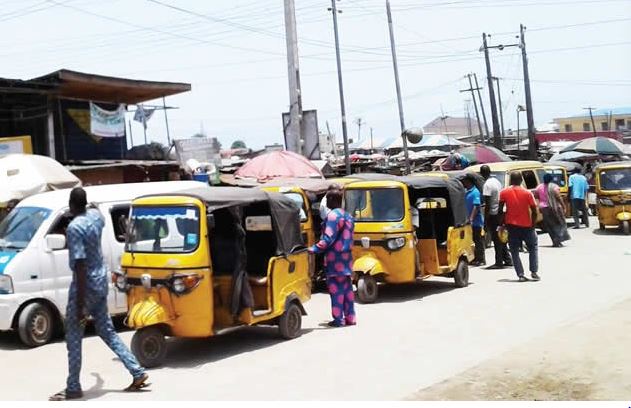 During the demonstration, the protesters were seen carrying placards inscribed with different messages that explained their grievances in the hands of MC Oluomo and his foot-soldiers.

The messages include ‘MC Oluomo is killing us,’ ‘No more Oluomo at Ifako Ijaiye,’ ‘We want TOOAN,’ among others.

Speaking during the demonstration, a yet-to-be-identified protester lamented excessive ticket sales, adding that tricycle business in the Ifako Ijaiye area of the state had been crippled.

The protester said, “We are operators; we have been working since morning and they have spoiled everything and we can’t even work again. Ticket here ticket there, we don’t want Oluomo again.

“They should stop Oluomo for us. I have been injured because I want to eat; they are just giving us tickets everyday. We don’t want Oluomo again.”

The protesters were reportedly dispersed by policemen attached to the Rapid Response Squad.

A video in possession of our correspondent showed police patrol vehicles were moving in the area to prevent a breakdown of law and order during the protest.

However, in another development, another group of tricycle operators protested around Abule-Egba, in the Agbado-Oke-Odo Local Council Development Area of the state.

The protesters lamented alleged harassment by armed thugs sponsored by the chairman of Tricycle Owners and Operators Association of Nigeria, Azeez Abiola, aka Istijabah.

The tricycle operators said the harassment started after they denounced their membership from NURTW and TOOAN, adding that Istijabah and his foot-soldiers allegedly condemned them for attempting to join the transport union committee created by the government.

Speaking with our correspondent, the erstwhile chairman, TOOAN, Branch B, Ojokoro-Ijaiye, Musa Adekunbi, aka Odo, accused members of the association of deposing him after pledging allegiance to the government-led committee headed by MC Oluomo.

He said, “I used to be the treasurer, TOOAN, but recently, I recorded myself in a video clip that I am no longer with TOOAN and that I am now working with the state government’s Park and Garages Committee but he (Istijabah) disagreed despite about 20 others leaving the zone to join the park management.

“My branch is at Ijaiye but he willingly allowed about 20 people to go and join the park management but he does not want me to join and I no longer want to join TOOAN. So, his boys were the ones that came to pursue us away from the Ijaiye park and we reported the incident at the Ojokoto police station and at Area G in Ogba.”

Reacting, the secretary, TOOAN, identified simply as Roland, said Adekanbi acted selfishly, adding that he wanted to take over TOOAN’s park after deciding to join PMC.

He said, “Our former zonal treasurer (Adekanbi) called for help from MC Oluomo and his gang to assist him in taking over our parks to join the Park Management Committee. Our association is not under PMC, but because of his own personal interest, that was why he wanted to take the park to PMC.

“I called him about the video and he said he did it because he was tense and that people told him to do it to be able to corner my boss because my boss has refused to join PMC.”

Contacted, Jimoh Buari, the spokesperson for MC Oluomo, said his boss had not directed anybody to take over parks in the areas, adding that the transport union members joined willingly.

Our correspondent had reported incessant clashes between loyalists of MC Oluomo and Istijabah in different areas in the state.

During the clashes, cases of exchange of gunfires had been recorded as passersby, residents, and business owners in the affected areas scamper to safety because of tension.

Biafra: IPOB Cannot Decide When Igbos Will Leave Nigeria, Only People Like Us Can Make That Decision – Okorocha