A Tanzanian clergyman made a startling claim about the late Nigerian singer, Osinachi Nwachukwu. 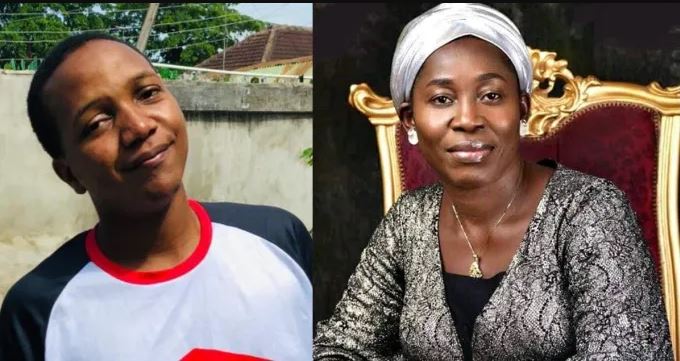 The cleric took to Facebook to share a purported revelation he received from God about late gospel singer, Osinachi Nwachukwu.

The clergyman identified as Allen Mziray, claimed that Lord told him that Osinachi who died on April 8, 2022, after she was allegedly beaten by her husband, failed to make heaven because of her worldly adornments.

According to Allen, he got the revelation while in the bathroom and he was instructed to share it publicly so people can reflect and abandon worldly adornments.

“OSINACHI NWACHUKWU AND HOW SHE FAILED TO ENTER THE GATES OF HEAVEN.

Let me give a warning first, ever since I shared a revelation about victoria orenze people have been attacking negatively and claim that I’m sharing false revelations that misleads people.

I wanna say this, no one is forced to believe what i write here so if you feel like I’m sharing lies don’t waste your time to write me an essay trying to prove me wrong. Comments will be deleted and accounts blocked. I don’t waste time in arguments.

I wasn’t thinking about this topic at all, I didn’t even imagine the Lord will tell me to talk about it but I have to obey him. I’m sorry for the heading if it’s hurtful but it’s the truth, I’m not the heaven gate keeper but what I hear from the Lord I’m told to say.

I was in the bathroom when i heard the voice of the Lord speaking to me. He said ” Go and talk about osinachi nwachuchukwu and how she failed to enter the gates of heaven because of worldly adornment”. He spoke few words and he went quiet. I was wondering why the Lord told me to talk about osinachi after so many days that have passed. But let me say what the lord desires so that his people can reflect from this and abandon worldly adornment.

I don’t have to talk about her background because she’s even more famous in Africa and possibly in the world now. her news of domestic violence has been on the headline even here in my country, it’s so tragic how she died in the hands of her cruel and heartless husband. It was after her death that all the stories about domestic violence she has been experiencing from her husband broke out. I was so sad to hear all that but i because even sadder to hear from the Lord that she failed to enter the gates of heaven.

The Lord told me” it is true that i anointed her and i gave her the gift of worship, she was my servant but she failed to separate from worldly adornment, as a result she was not allowed to enter the kingdom of heaven because of wordly adornment”. This is a very sad thing saints, the Lord is very serious when it comes to his word, he does not change nor will he change. If he says that no jewellery for his children then we must obey his word regardless of where you congregate.

Let us review the scriptures first;

Genesis 35:1-4 “And God said unto Jacob, Arise, go up to Bethel, and dwell there: and make there an altar unto God, that appeared unto thee when thou fleddest from the face of Esau thy brother.

Then Jacob said unto his household, and to all that were with him, Put away the strange gods that are among you, and be clean, and change your garments.

And let us arise, and go up to Bethel; and I will make there an altar unto God, who answered me in the day of my distress, and was with me in the way which I went.

Let’s see the next scripture;

Exodus 33:4-5 “And when the people heard these evil tidings, they mourned: and no man did put on him his ornaments.

For the LORD had said unto Moses, Say unto the children of Israel, Ye are a stiffnecked people: I will come up into the midst of thee in a moment, and consume thee: therefore now put off thy ornaments from thee, that I may know what to do unto thee.

Do you ask yourself why the Lord told them to put off their ornaments?, well the answer is in the first scripture I just shared. The Lord already called these ornaments strange gods in the first book of the bible, how are you expecting him to change his decision!?.

Go and read Isaiah 3:16-24, the Lord spoke through his prophet Isaiah that these ornaments that the dauthers of Zion wear are displeasing to him and they make women look like seductresses and temptresses. Only women who want to seduce men wear these wordly ornaments not God’s children.

You may say ” but Esther wore jewellery as a queen” and so many scriptures in the old testament that don’t speak negative about earrings, necklace and all jewels but see these scriptures that finalize God’s decision about worldly adornments.

1 Peter 3:3 “Whose adorning let it not be that outward adorning of plaiting the hair, and of wearing of gold, or of putting on of apparel;”

1 Timothy 2:9-10 “In like manner also, that women adorn themselves in modest apparel, with shamefacedness and sobriety; not with braided hair, or gold, or pearls, or costly array;

But (which becometh women professing godliness) with good works.”

These scriptures are from the new testament so this is not about being under the Law but it’s a commandment the Lord gave through his apostle paul, no compromise!!

It is so sad how many churches today talk about repentance and hell but they do not preach about things that will cause many to miss heaven, especially outward adornment like fake hair, wig,make up, jewellery and pants for women. No matter how much the church overlooks these things but to God they are important to talk about because they take women to hell. You may ask me “where is osinachi then”, well I don’t know, what i know is that she failed to enter the gate of heaven because of worldly ornaments.

No matter how anointed or used by the Lord someone is, if he is attached to worldly things he will not make it to heaven no matter what. The gifts of God are irrevocable, that means you can still be used by God to heal, prophesy and you can even raise the dead but that is not a guarantee that you will enter heaven.

Matthew 7:21-23 “Not every one that saith unto me, Lord, Lord, shall enter into the kingdom of heaven; but he that doeth the will of my Father which is in heaven.

And then will I profess unto them, I never knew you: depart from me, ye that work iniquity.”