Many Feared Injured As Muslim Worshippers, Hoodlums Clash In Lagos

Many were feared injured in the early hours of Sunday when a group of Muslim worshippers and hoodlums clashed in Marina area of Lagos. 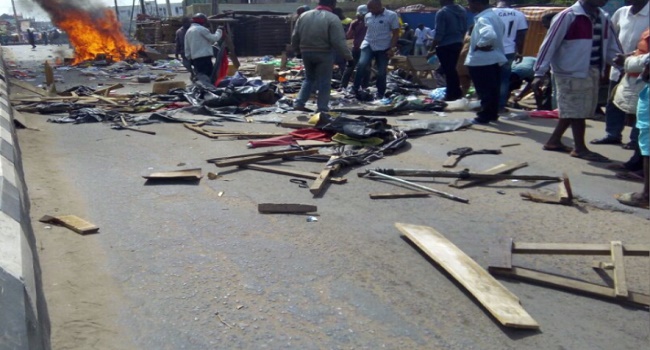 The reason for the fracas, which lasted from 1am-am, according to sources remains unknown.

The Nation learnt that several dangerous weapons such as cutlasses, knives and others were used during the brawl, which saw several properties vandalised in the Marina area.

An eyewitness said: “I think the area boys tried to rob the Muslims during their early morning prayers and the Muslim folks resisted them which caused the fight.”

It was gathered some men from the Lagos State Neighborhood Safety Corps(LNSC) later showed up and chased the hoodlums away.

Olu Falae reveals how military rigged election for Obasanjo In 1999

Police Officer, Aliyu Giwa, Shares Shocking Story Of How A Man Tried To Frame His Own Friend As A Fraudster