A Director with the National Board for Technical Education (NBTE) has been identified as among those killed by bandits who bombed an Abuja-Kaduna train on Monday.

The director identified as Abdu Isa Kofa Mata was killed on Monday night, March 28.
A family source, who confirmed the development, said that the deceased will be buried in Kano by 4.00pm on Tuesday, adding that they are awaiting the arrival of the corpse from Kaduna.
One Maiwada Dammallam, a friend to the 55-year-old father of five, said they both communicated on Monday morning, before the ill-fated journey.
Read his post below:
Allahu Akbar! Inna lillahi wa inna ilaihi raji’un! I was just told about the shocking death of Abdu Isa Kofar Mata (Gigi Kofar Mata). He’s among the victims killed in yesterday’s train attack by bandit between Katari and Rijina on the Kaduna/Abuja road
The last I communicated with him was yesterday in the morning, 7:23am to be precise. We were both unaware that by the close of the day, he will be another statistic on the eerily consistent and persistent list of unnecessary and avoidable victims of insecurity in Nigeria. Insecurity is one of the areas we regularly discuss with Gigi.
His passion and concern for a sustainable solution to the seemingly unsolvable problem of insecurity in Nigeria, especially in the North stood him out as a constructive critic and public affairs analyst.
His intelligent perspectives were just as enriching. We had as much reasons to disagree as we had to agree on numerous issues yet, we remained the best of friends to the end. It’s not unexpected that each of our mutual friends that I reached out to confirm his demise burst out in tears. Quite a devastating tragic event.
My sincere condolence to Gigi’s family, his physical and virtual friends. May Allah SWT in HIS infinite mercies grant him Jannatil Firdau. 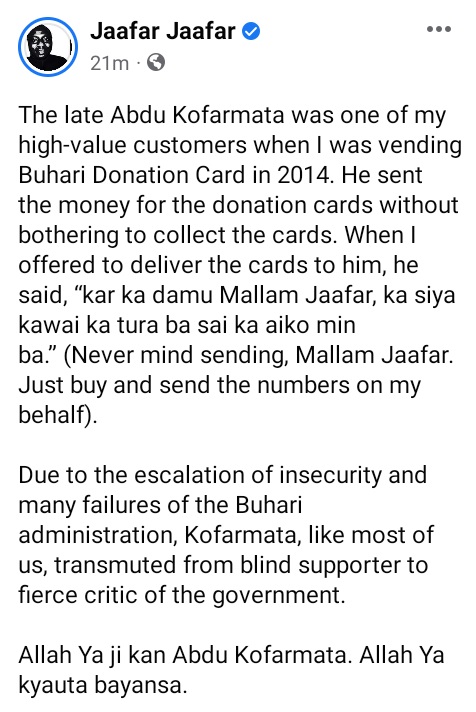