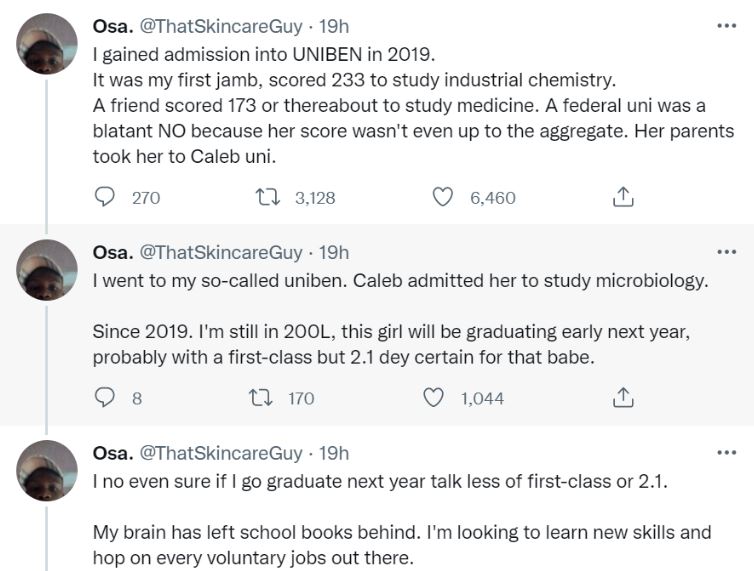 A Nigerian student took to Twitter to lament about the ongoing strike by the Academic Staff Union of Universities (ASUU).

Recall that lecturers in the country have been on strike over some of their demands they claim the federal government is yet to meet.

Sharing his ordeal on Twitter, @thatskincareguy revealed that his colleague who he scored higher than in UTME is about to graduate after being enrolled in a private university, while he’s still in 200 Level.

He added that his “brain has left school books behind” and he’s currently looking to learn new skills.

”I gained admission into UNIBEN in 2019. It was my first jamb, scored 233 to study industrial chemistry. A friend scored 173 or thereabout to study medicine. A federal uni was a blatant NO because her score wasn’t even up to the aggregate. Her parents took her to Caleb uni.

I went to my so-called uniben. Caleb admitted her to study microbiology. Since 2019. I’m still in 200L, this girl will be graduating early next year, probably with a first-class but 2.1 dey certain for that babe.

I no even sure if I go graduate next year talk less of first-class or 2.1. My brain has left school books behind. I’m looking to learn new skills and hop on every voluntary jobs out there.

This is what ASUU is doing to me. The uncertainty of everything, the stress, the financial strain, everything, is taking a toll on me.

No Nigerian student deserves this. Even if they voted for buhari in 2015 or 2019. No student! I might just quit this school of a thing. Never seen such wickedness portrayed by so called leaders. Smh”