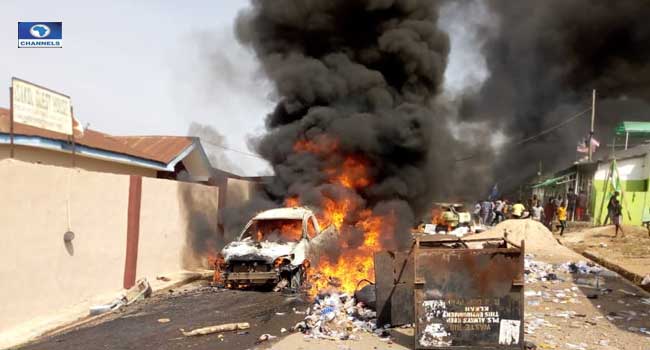 Angry youths have burnt down a church in Akure, the Ondo State capital after the corpse of a 12 months old boy was allegedly exhumed from the premises.

The one-year-old boy, Gold Kolawole, was declared missing on November 10, during church service at the children’s section of Sotitobire Praying Ministry in the Ondo State capital.

The situation turned violent after news filtered that the corpse of the missing one-year-old was found inside the church premises.

An eyewitness told Channels Television that rumours had filtered onto the streets that the body of the missing boy had been exhumed from the church premises which triggered the attack.

Kolawole’s mother, Modupe raised an alarm after he went missing during a church service in November.

Speaking to Channels Television, the Commissioner of Police in the state, Mr. Undie Adie, however, said that nobody was exhumed from the church premises.

He however confirmed that the founder of the church, Alfa Babatunde has been taken into the custody of the Department of State Service (DSS) for questioning.

He also confirmed that a number of casualties were recorded during the attack on the church, but insists his men were only on the ground to maintain law and order.

Since the disappearance of the one-year-old boy, his parents and the General-Overseer have been trading blames over his disappearance.