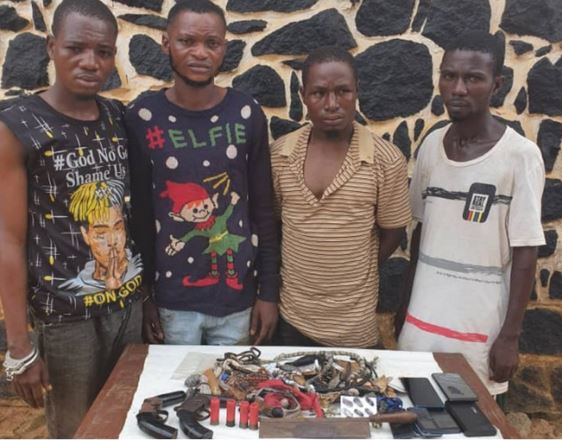 But, the Ogun State Police Command said it has arrested four persons in connection with the murder of the said Segun Onifade.

Police said the four persons, who were nabbed on Sunday, were “members of the dreaded Aiye cult group,” stressing that they are “responsible for the killing of one Segun Onifade.”

The Ogun State police image maker, Abimbola Oyeyemi, stated on Monday that the suspects have been on the wanted list of the command before now.

Oyeyemi disclosed that they were apprehended following information received by policemen at Ilaro divisional headquarters.

The cops had information that “the suspects were holding a nocturnal meeting at a hideout behind Eleja Primary School, Igbo-Ewe area of Ilaro.”

Upon the information, the DPO of Ilaro division, CSP Olayemi Jacob, was said to have mobilized his men to the scene where four of the suspects were nabbed.

They are: Samson Jacob (a.k.a Cybog), Iyanu Kazeem Akande (a.k.a Omo Iyami), Adebayo Adeoluwa (a.k.a Dudu) and Yusuf Adelakun.

Meanwhile, the Commissioner of Police, Lanre Bankole, has ordered that the case be immediately transferred to the anti-cultism unit of the State CIID for discreet investigation.