One Perish, Four Others Injured In Bauchi Crash

One life has been lost in a fatal accident involving a Peugeot 406 car and a motorcycle at Gyara village, Bogoro Local Government Area of Bauchi State on Sunday. 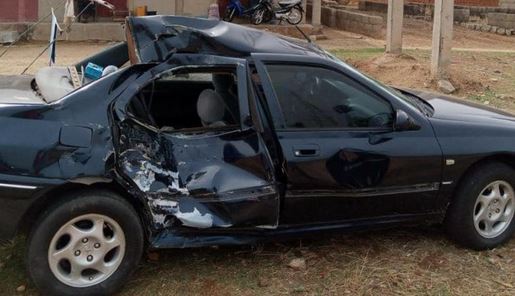 A report by the Information Officer of Bogoro LGA, James Gomna, revealed that four other persons sustained varying degrees of injuries in the accident.

According to Gomna, the Peugeot 406 vehicle belonged to a lecturer with The Federal Polytechnic, Nassarawa, Nasarawa State, Mallam Nasiru B. Abdullahi, who was in the company of his son, Abdalla Nasiru, and driver, Namama Abdullahi, as of the time of the crash.

The occupants of the car, the report informed, sustained varying degrees of injuries in the crash.

Gomna further informed that the lecturer, his son and the driver were on their way to Bauchi on a condolence visit to some of their family members.

Meanwhile, a Gyara village resident, who witnessed the accident explained that the motorcyclist wanted to overtake the Peugeot 406, leading to the accident.

The motorcyclist, one Godiya Samaila, who was also a resident of the village, according to the eyewitness, died on the spot, while the passenger on the motorcycle was injured in the accident.

The remains of the deceased, it was gathered, had been deposited in the morgue in the hospital.

“I can confirm to you that this morning (Sunday morning), two young men riding on a motorcycle wanted to overtake a vehicle leading to an accident.

“The young men were Mr Godiya Samaila, a resident of Gyara village, who died at the spot, while his brother, Mr Abinuku, sustained a deep cut on his forehead. The other victims have been taken to Bauchi for further treatment,” the eyewitness, who pleaded not to be named explained.

Also, the police in Bogoro have confirmed the incident and urged motorists to be wary of unnecessary overtaking when driving along the highway.