Some members of the National Youth Service Corps (NYSC) corps have escaped death by the whiskers after their bus caught fire while being refueled. 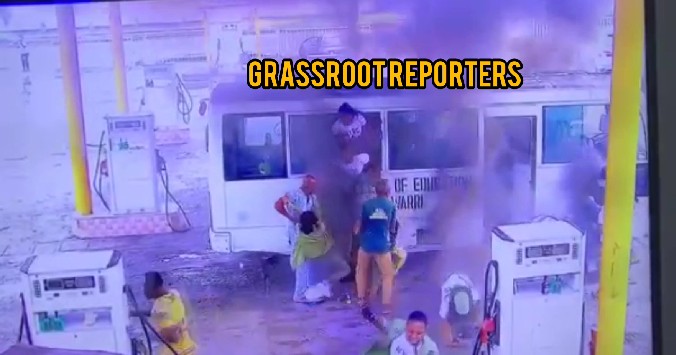 According to Grassroot Reporters the incident happened yesterday.
More than 60 NYSC members escaped the incident while many others sustained injuries.
It was gathered that the coaster bus was boarded by the corpers to Asaba for the passing out parade (POP) ceremony.
However, it bursted into flames while the bus was being refueled at a filling station close to the Nigerian Navy Headquarters in Warri.
The bus, belonging to College of Education, Warri, was hired by the corps members to convey them to Asaba for their final POP after the completion of their service year,
The bus was said to have ran out of fuel shortly after the journey began.
Daniel, one of the affected corps members who spoke with GRASSROOT REPORTERS said:
“The driver stopped at a filling station close to Nigeria Navy Barracks in Warri to refuel the bus. While we were inside, and the filling station attendant was dispensing fuel into the bus, we heard a deafening sound, and everywhere was covered with smoke.”
GRASSROOT REPORTERS gathered that many of the corpers sustained serious injuries, while a female corp member had a serious dislocation and was rushed to an undisclosed hospital.
It was gathered that the corps members lost their phones, bags and other personal effects.
The cause of the fire is unknown but a source said the driver of the bus allegedly failed to switch off the bus while it was being refueled.