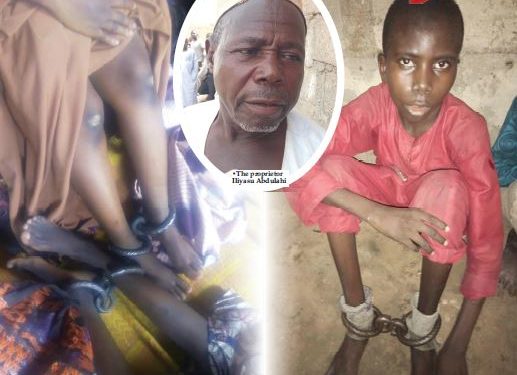 Their conditions were as awful as they were pathetic. Their skins were decorated with wounds from lashes and the heavy chains with which their hands and legs were shackled. Their foods were prepared in the most unhygienic conditions and should only be fit only for pigs. They are not only insipid; they are, in most cases, rotten.

Their inhuman conditions were compounded by the heat in the male ward, which made it difficult to breathe and exposed the hapless inmates to infectious diseases. It was clearly a scene depicting man’s inhumanity to fellow man.

Those were the conditions of the 54 male and female inmates of an illegal correctional centre in Gusau, Zamfara State, busted by security agents on Tuesday.

Zamfara State governor, Bello Mohammed Matawalle, had ordered a crackdown on the illegal ‘correctional centre’, which was effected on Tuesday afternoon. He had got wind of the existence of the centre and immediately ordered his Commissioner for Special Duties, Alhaji Mohammed Saddiq Maiturare, to lead a team of security operatives to the place.

Awwal Idris, an 11-year-old inmate, who said he was brought to the centre all the way from Kaduna State, explained that he was the one appointed to share food to the other detained pupils and also took part in preparing the foods.

Explaining why he was brought to the centre, Idris said he was in the habit of stealing petty things from neighbours and his parents got fed up with it. They told him that he would be travelling with a relative, only to find himself enrolled in the camp on arrival in Gusau.

Food, according most of the students at the centre, is always served late. Breakfast according to Farida, who was brought in from the Gusau metropolis, is served around 12 pm. She said they were being fed with “bad food” twice a day, despite a monthly payment of N17,500 by every inmate.

Farida, 24, said her uncle brought her to the centre because he considered her to be stubborn, creating division in the family and causing her parents to be at loggerheads always. The schools certificate holder recalled that whenever she was reprimanded by her mother, her father would rise in her defence and almost divorced her mother because of her.

Asked what she would do after her release, she said: “I am going to stop misbehaving and get married once I get a suitor.”

It was gathered many of the parents and guardians of the inmates have long abandoned them because of the fees they had to pay the proprietor.

It was also gathered that in some cases, the proprietor himself instructed the parents to stop visiting their children.

In the male ward, one of the inmates, 50-year-old Aminu Ibrahim, a father of one, alleged that at times, the inmates were down with stomachache and would vomit because of the unpalatable nature of the foods that were served them; an allegation the proprietor disputed.

Ibrahim recalled that he took a wife from a community in Niger State, but she has since packed her belongings and returned to her parents. He said he was a big time businessman before he became bankrupt. It was at this stage, according to him, that his elders lured him to the camp because they believed he had become addicted to hard drugs.

A female inmate, Zainab Sani, had spent six months with chains in both legs, with wounds inflicted on her back, which she said she got from the beatings by the teachers in the camp.

She said she was brought to the camp by her parents from Zurmi Local Government Area of Zamfara State because they were fed up with her associating with male friends and receiving phone calls from them.

Answering questions before he was whisked away in a police Hilux van, Abdullahi said he was glad that the press had gotten hold of the news about his school, which he said would make him famous.

He asked the state government to assist him and provide the necessary structures for him to continue with what he had been doing for 30 years to enable him tame naughty and prodigal children.

Abdullahi said: “They are all delinquents, truants and wayward people. Some of them are thieves, some of them take hard drugs and some of them even beat their parents. Ours is to correct them.

“I have a personal doctor for them; a trained doctor from Yeriman Bakura Hospital in Gusau, who is assigned by me to be their physician. His name is Doctor Lukman. He is here whenever the need for him arises and even when my students are without any ailment.”

He said he had been running the camp as an almajiri school for more than 30 years, saying that his students consisted mainly of recalcitrant or wayward people and others with criminal tendencies.

He boasted of his ability to instill and inculcate morality in them with teachings from the Qur’an. Abdullahi said he was an expert in healing cigarette and Indian hemp smokers by giving them a special concoction which they take once in a month.

By taking the concoction, he said, the inmate would vomit all the rot he or she has been inhaling from weeds and other hard drugs, which, according to him, is a sign that the medication has worked and they would not want use hard drugs when they are fully cured and discharged.

The security operatives immediately released the inmates and took them to the state remand home where they were fed before next line of action to rehabilitate and reunite them with their families.

Governor Matawalle has since ordered the closure of the centre as well as the prosecution of its operators.