The camp of former Vice President Atiku Abubakar yesterday hit back at Bauchi State Governor Bala Mohammed, saying the governor has no basis for rubbing shoulders with Atiku. 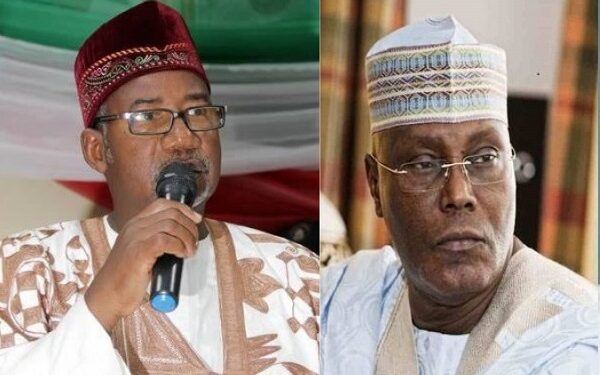 Atiku and Mohammed, who are both seeking the presidential ticket of the Peoples Democratic Party (PDP) at next month’s primaries, were among the 17 aspirants of the party screened yesterday by a committee it set up for that purpose.

All the aspirants are now eagerly awaiting the decision of the PDP National Executive Council (NEC) on the zoning of the presidential ticket.

Mohammed had fired the first salvo last Sunday when he said on Channels Television that he was more qualified than the former vice president.

“I’m more prepared to run for the first seat under the platform of the PDP. I’m strong and agile. I’ve built bridges and I’ve good will across the country,” he said in response to a question on his endorsement by Northern Elders in the PDP as one of the two consensus candidates ahead of the primaries.

He added: “The only thing that will make me step down for anybody is when Nigerians or party leaders reject me.”

He was immediately responded to by an ally of Atiku, Senator Ehigie Uzamere, who said the governor was punching above his weight.

He said Mohammed was “dancing naked in the market square,” adding that “nobody is against your contesting for president and squaring it off with Atiku Abubakar and others, but you do not have to descend to the level of insult. You have reeled off your pedigree. What about Atiku, are you comparing yourself with him?”

Next came the spokesman for the Mohammed Campaign Organisation, Prof. Udenta Udenta, who asked the PDP to call Uzamere to order.

He called Uzamere “a meddlesome interloper who peddles political dirt as a way of life” and threatened to dress him down.

He added: “Unbecoming characters like Senator Uzamere, whose stock in trade is to damage people’s reputation as a means of getting on in life, and, indeed, the campaign organisation they are affiliated to or associated with must be cautioned by the NWC to avoid the situation from getting out of hand.

“The PDP must reign in those using uncouth language against other aspirants.

“This will be our last restrained response to his unprovoked attack. Next time, we will remove our gloves and go bare-knuckles with such unsavory individuals.”

However, Uzamere told Udenta yesterday that he was ready for his fight.

His words: “There is a popular saying that those the gods want to destroy, they first make mad. Those who do not know where the rain started beating them won’t know when it stops raining. My dear Gov. Bala Mohammed you are dancing naked in the market square and only a true friend will draw your attention to your foibles, as you begin to derail.

“Nobody is against your contesting for president and squaring it off with Atiku Abubakar and others, but you do not have to descend to the level of insult. You have reeled off your pedigree. What about Atiku, are you comparing yourself with (him)?

“It is always good to remember who we were, where we started from, at what point fortune smiled at us, and who we really are.

“Atiku Abubakar is not the best man on earth, but there’s no basis for comparison between you, Bala Mohammed and Wazirin Adamawa. You were a Special Assistant to Minister Isa Yuguda appointed by Atiku Abubakar and his principal President Olusegun Obasanjo, who (Isa Yuguda) you betrayed and humiliated.

“Before this appointment, you worked with several ministries and we are yet to see or hear of your extraordinary achievement in any of these ministries.

“You became a Senator in 2007, long after Vice President Atiku Abubakar had served for 8 years as VP. A senator that almost lost his seat through a recall by his dissatisfied people but for the saving grace of your colleague senators who recommended you for ministerial appointment to Goodluck Jonathan.

“Or have you forgotten? I’ll remind you. I as convener, together with Senators Emmanuel Paulker, Nasif Suleiman and Gada, formed the National Interest Group (ING), a pressure group that convinced the National Assembly on the emergence of Jonathan as President, under doctrine of necessity.

“To give ING a national outlook, we invited and persuaded you of then ANPP stock, to chair the group. President Goodluck Jonathan had offered the group a ministerial slot, and to save you the embarrassment of a recall by your people, we gave you that slot. This marked a major turning point in your life.

“Before your turning point in life, Atiku Abubakar had won election as Governor of Adamawa State before he left it to become Vice President. Where were you? A journalist chasing scoops from Atiku Abubakar’s office?”

The two disqualified aspirants are to forfeit the N40 million each of them paid for the expression of interest and nomination forms.

The chairman of the presidential screening committee, Senator David Mark, announced the disqualification of the two aspirants but declined to reveal the identities of the affected aspirants and the reason (s) for their disqualification.

He merely said the two aspirants did not meet the screening requirements. He did not elaborate.

He however said the two disqualified aspirants were free to appeal the decision at the Screening Appeal Committee set up by the party.

When asked if the screening committee made any recommendation to the party to refund the N80 million nomination fees paid by the aspirants, Mark said: “Why should the party refund the money? What will be the reason now?”

Mark, who briefed journalists after the exercise, said: “We screened 17 aspirants, which is quite a number. We cleared 15, two have not been cleared.

“We haven’t released the result to them. So if you ask questions in that direction, you are wasting time.

“I think on the whole that is what we have done. And we are quite satisfied with the standard of the aspirants by and large. And we think that any one of them who gets the ticket would win the election in 2023”.

Speaking further on the exercise, Mark said the screening went well and that the panel was thorough with the assignment.

The chairman of the panel added that the report of the screening exercise would be submitted to the leadership of the party later in the night.

Continuing, he said: “This night, we will submit our report and those who were not cleared have a right to appeal. I am sure they will go on appeal because there is an appeal panel”.

He described the 15 aspirants cleared by the committee as qualified enough to win the party ticket and also win the 2023 election.