The Nigeria Police Force says it has begun a probe into a viral video of some police officers in Enugu state brutalizing a man.

Writer Ayo Sogunro shared the video from the assault on his Twitter handle and wrote;

”When people still ask why #EndSARS had to happen, this is part of it. The Nigerian police will beat up a person senseless for being rude and then turn round to expect public sympathy. It’s not going to happen.”

Reacting, the Nigeria Police force says the incident is now being investigated.

”The Enugu State Police Command has begun investigation into this incident with a view to identify and sanction the operatives involved.” 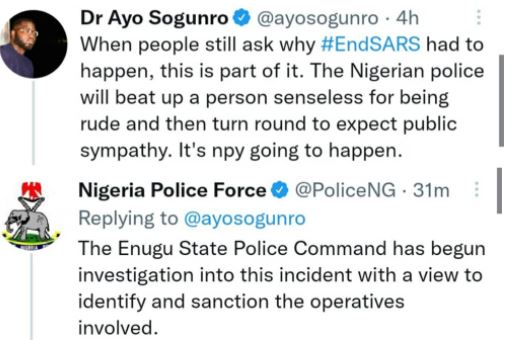