Taraba Blast: All I Heard Was Sound Like Thunder And Blanked Out — Bar Owner Recalls

As the death toll from the bomb blast at Iware International Cattle market in Ardo-Kola Local Government Area of Taraba State increased to six, yesterday, the owner of the beer parlour where the bomb exploded said all she heard was a sound like thunder before passing out.

The shop owner, Elizabeth Danjuma, who confirmed that the bomb exploded at her shop, could barely speak and was still in shock when approached on her hospital bed.

She said: “Honestly, what I know was that I heard a sound like thunder and blanked out. By the time I regained consciousness, I didn’t know I was wounded.

“I saw some others affected by the blast and that was how we were all brought here.

“I have been selling my drinks in the beer market for over one year and nothing like this has ever happened.

“The bomb was brought here in a polythene bag and the person told someone to keep it for him that he would be back.

“After he left, the explosive device went off and caused the havoc we are all suffering now. I was not the one that collected the polythene bag from him.”

Vanguard reported that the explosive device went off at a cluster of shanties where local beer is being sold. 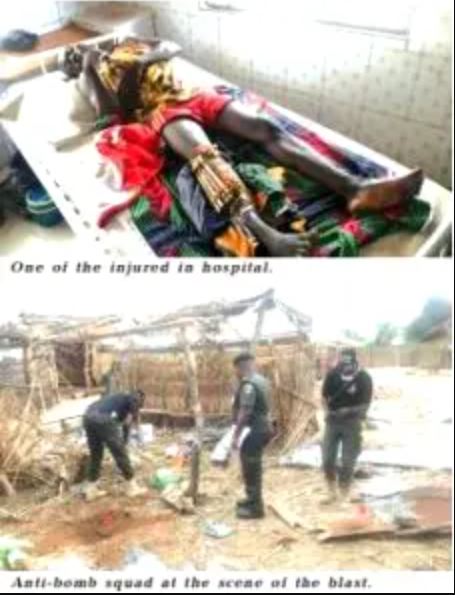 As the Police Public Relations Officer of Taraba Police Command, DSP Abdulahi Usman, yesterday, confirmed that the death toll had increased to six, the leader of the community, Martins Lauje, also confirmed the casualty figure.

Speaking with Vanguard, he said the incident came as a rude shock to them and solicited more security presence in their community.

At the time Vanguard visited, men of the anti-bomb squad of the Police had cordoned off the site of the blast.

Vanguard also visited Miyetti Allah Clinic and the state Primary Health Care facility in Iware where the wounded are being attended to.

It was observed that about 20 persons are currently receiving treatment at the two facilities while those with critical cases were referred to Federal Medical Centre, FMC, in Jalingo.

Acting Chairman of Ardo-Kola LGA, Ismail Zakari, said the state government had taken proactive action to ensure the wounded were given adequate care.

A member of the  House of Assembly, Charles Maijankai, who was also at the hospitals donated cash gifts for the treatment of those wounded and called for vigilance.

Speaker of the  House of Assembly, Joseph Albasu Kunini, during plenary yesterday condemned the attack.

He described the attack as inhumane and urged security agencies to brace up to tackle the ugly incident from spreading to other communities.

While condoling with those that lost loved ones, Kunini also called on residents of the state to be vigilant and conscious of strangers coming into their communities.

Contacted, spokesman of the state police command, Abdullahi Usman, noted that more men have been deployed to the area.

He also said the team in collaboration with hunters and vigilantes are currently combing the area.