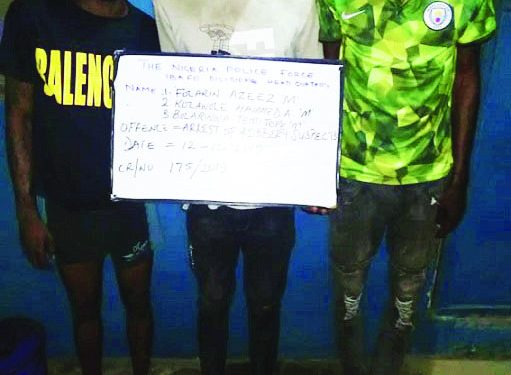 The police in Ogun State have arrested three suspected members of a syndicate alleged to have robbed a hospital in Ibafo.

The suspects allegedly dispossessed patients of their belongings and escaped through the bush before the policemen from Ibafo Division arrived on the scene.

An eyewitness said that during investigation, the Divisional Police Officer (DPO), SP Abiodun Ayinde, received intelligence report that the hoodlums were hiding at Shimawa and he moved his men to the area on December 12.

Three of the suspected robbers were arrested and 12 phones and wristwatches belonging to some of the victims were recovered, police spokesman DSP Abimbola Oyeyemi said.

He said the command received information that the syndicate had carried out robberies in Osun State.

“The Commissioner of Police, Kenneth Ebrimson, has ordered the transfer of the suspects to the Special Anti-Robbery Squad (SARS) for investigation into their activities. He warned that anyone who comes to Ogun State with the intention to perpetrate any crime will have himself/herself to blame, as the command is ready to take the battle to the doorsteps of criminals,” said Oyeyemi.