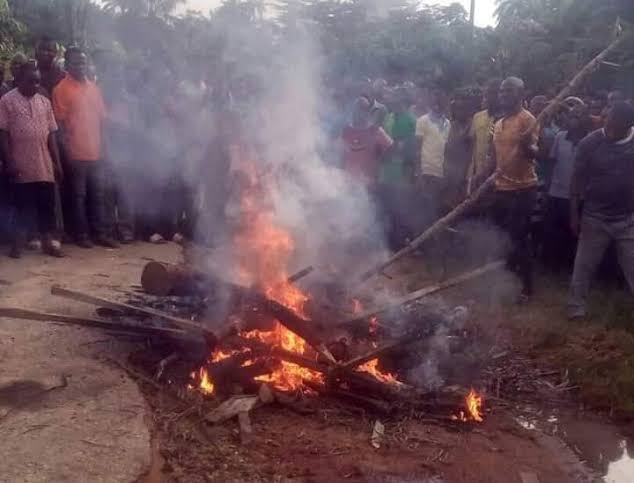 They were caught when they tried to rob one of the houses in the area. Their charred remains are scattered on Art Street, off Mayne Avenue.

Still on Saturday morning, in another part of Calabar in Ikot Ansa, another suspected armed robber was also set ablaze by a vigilante group which arrested him.

An eye witness, John Akpan, a resident of Ikot Ansa said the suspect was a member of a 3-man gang which robbed a house in the neighborhood but luck ran against him.

Two others escaped but he was caught said the eyewitness.

As of the time of this report, his remains have not yet been evacuated from the scene in Calabar Municipal local government area.

His legs with matched wounds were tied with rope while his upper body was completely burnt beyond recognition.

“The boy is suspected to be in his teen. He was in a group of three armed robbers who came to rob our neighborhood at about 1 am this Saturday.

“He was caught by some vigilante group while the other two escaped and left him.”

The Police Public Relations Officer, Irene Ugbo said she was not aware of the incident but cautioned against jungle justice, saying the law is against it.

“We have usually cautioned against what is called jungle justice. All criminals must always be handed over to the law enforcement agencies for prosecution.”

Domestic violence: Mother of seven beaten to death by husband in Ebonyi