No fewer than two persons have been confirmed dead after they were involved in a multiple accident involving six vehicles along Ikorodu Road, Lagos, according to Daily Trust.

It was gathered that the victims were returning from Mile 12 where they had gone to buy goods when the accident occurred around 2am on Friday. 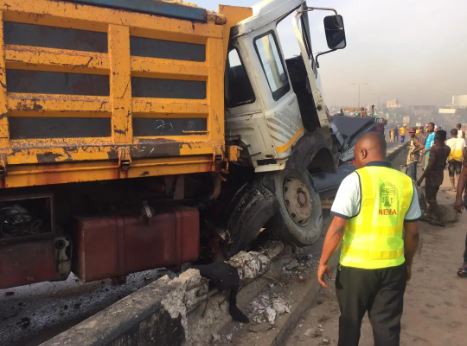 Daily Trust learnt that two persons – a man and a woman – died on the spot and one of the corpses was taken to a morgue by the Lagos State Environmental Health Monitoring Unit (SHEMU).

The Lagos Terrorial Head of the National Emergency Management Agency, Mr Ibrahim Farinloye, who confirmed the accident, said the family members of the second victim came to the scene to carry her corpse.

He said, “A multiple crash occurred at Odo Iya Alaro located on the bridge linking Maryland and Ojota, Ikorodu Road, Lagos caused 2 fatalities. The incident occurred at about 0215hours.

“A commercial bus coming from mile 12 after early morning purchase wares by six women in the bus. It was revealed that  the tipper truck lost control while on high speed and ran into the vehicles, thereby resulting in the multiple accident.

“Unfortunately, two Adults (one female and one male) were confirmed dead at the scene. The male adult was handed over to SEHMU at the scene while the female was taken by her immediate family.

“Several persons were also injured and taken to nearby hospitals. LASEMA, NEMA, LASTMA, FRSC, LASAMBUS and Nigeria Police participated in the response.”