Two Persons, 18 Camels Killed In An Accident In Bauchi

Two persons alongside 18 camels died in a tragic accident involving a vehicle and a flock of camels in Bauchi State.

The accident occurred in Dagauda town in Dambam Local Government Area of the state along the ever-busy Azare-Potiskum expressway.

An eye witness who is a Lecturer at the College of Legal and Islamic studies Misau, Sulaiman Umar said that the incident occurred on Friday 11th March.

“On that fateful morning of Friday 11th March, 2022, we woke up to witness an accident involving a hummer bus and a flock of Camels while crossing the road abruptly around 10.00am,” he narrated.

Umar said that the vehicle rammed into the flock of the Camels which resulted to the death of two people and 18 of the Camels saying that the weather which was dusty on that day as a result of harmattan, contributed to the accident because visibility was very poor.

He also said that it was not the first time such incident was happening, adding that even last two years something similar happened at the same place involving a Sharon commercial mini bus and a flock of Donkeys during which some of the donkeys were killed.

“Yes, we have the report of the accident in Dambam, Dagauda town precisely. A commercial Hummer bus ran into a herd of Camels last week Friday,” he stated.

“Two people were confirmed dead, others were injured and a number of the Camels were also killed.” 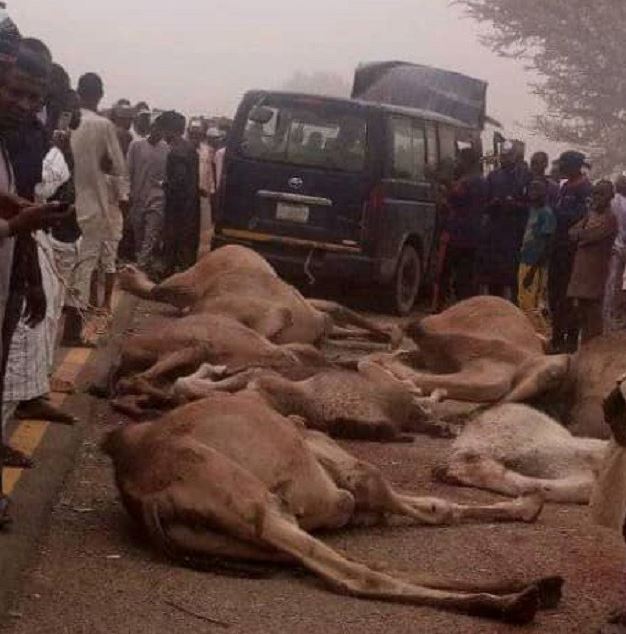 Osinbajo Has Not Informed Buhari Of His Presidential Ambition – Laolu Akande