The Oba of Benin, Oba Ewuare II has praised Vice President Yemi Osinbajo saying those contesting against him in the 2023 presidential election are already shivering. 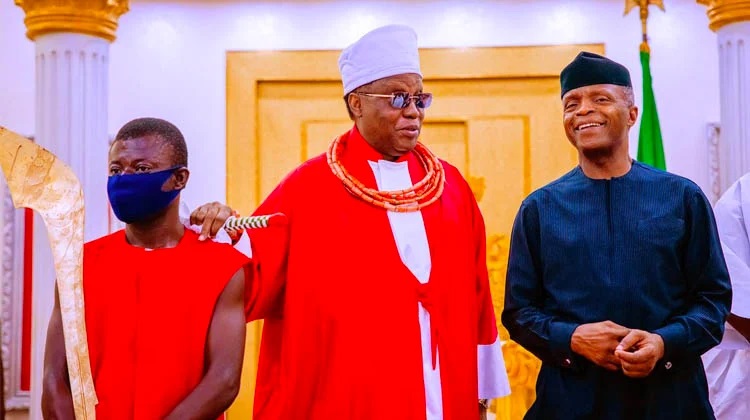 Osinbajo visited the traditional ruler of Benin Kingdom on Thursday at his palace as part of ongoing consultations with stakeholders on his ambition to succeed President Muhammadu Buhari in 2023, according to Punch.
While thanking the VP for visiting him, Oba Ewuare said Osinbajo’s credentials speak for themselves.

Describing him as a humble and calm man, the Oba of Benin said he had to cancel his trip to Abuja to receive Osinbajo.
“We got a letter from your office just the day before yesterday (Tuesday) that the Vice President is coming. We had to put the trip on hold.
“We have heard the reasons why you are here. We don’t need to overflog your credentials, they speak for themselves.
“Because of your credentials, humility, calmness, there is no gainsaying that your contestants are shivering where they are,” the monarch said.
Osinbajo is one of the All Progressives Congress aspirants. Others include former Lagos State governor, Bola Tinubu; Minister of Transportation, Rotimi Amaechi; Minister of State for Education, Emeka Nwajiuba; Minister of Labour and Employment, Chris Ngige; Ebonyi State Governor, Dave Umahi; Kogi State Governor, Yahaya Bello; former Imo State Governor, Rochas Okorocha; former Abia State Governor, Orji Kalu; amongst others.The APC presidential primary to decide the party’s flagbearer is scheduled to hold at the end of May 2022.